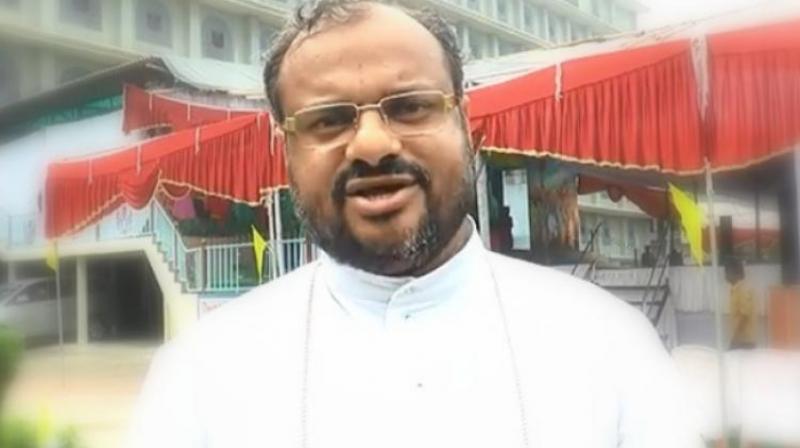 The nun had alleged that Jalandhar Bishop Franco Mullackal sexually abused her 13 times between 2014 and 2016. (Youtube Screengrab/ eCreators Mangalore)

Thiruvananthapuram: The priest who allegedly made a phone call to Kerala-based nun offering "land, building and safety" if the rape complaint against a Bishop is dropped, has been asked to step down.

According to reports, the Carmelites of Mary Immaculate (CMI) Congregation termed the alleged phone call to be an unfortunate incident and Father James Erthayil of the Kanjirappallly diocese has been asked to step down.

An enquiry has been initiated, it said.

A conversation between priest and a nun in Kerala has been leaked, adding fuel to allegations about how Catholic Church is attempting to bury complaints of sexual harassment by clergymen.

An 11-minute audio clip is between Father James Erthayil of the Kanjirappallly diocese of Carmelites of Mary Immaculate and Sister Anupama from the Missionaries of Jesus in Kottayam, who was one of the five nuns who came out in support of a 44-year-old nun, allegedly sexually abused by Bishop Franco Mullakkal of Jalandhar diocese.

The nun had alleged that Jalandhar Bishop Franco Mullackal sexually abused her 13 times between 2014 and 2016. She went to the police only after the Bishop filed a complaint against her and five others, accusing them of threatening and blackmailing him.

The Bishop, who has been booked for rape by Kerala police, has on his part, claimed innocence and said he is a victim of vendetta for taking disciplinary action against the nun.

The leaked audio of the alleged phone call to the nun who stood by the rape survivor now finds another priest acting as a mediator who made a phone call offering, “land, building and safety" if she withdrew her rape complaint against the Jalandhar Bishop.

According to reports the leaked phone call sees one priest introducing himself to the 30-year-old nun Sister Anupama who has supported the survivor and saying, "We can buy some land, build a convent and shift you all there safely. This won't happen tomorrow but everything has a time. We can think about it."

In the telephonic conversation, the Father is heard making veiled threats if the woman doesn't withdraw her complaint.

"If you all are adamant on your stand, this won't happen. If you withdraw your complaint and go to one of your convents in Odisha, Andhra, threats may arise. But if you move independently and go under some other Bishop, there won't be any threats. It will be good if you think about this and if you decide to do this positively, I will help you in any way possible. I can't do everything, but will help in whatever I can do. In the sense that we can buy some land, build a house, shift them. They will support. I suggested this because they have said they will support," he says.

The nun asks who will "support" the family, the Jalandhar Diocese? He answers with a "yes".

"If we have to buy 10 acres of land and build a decent building for everyone, it's not easy. So they will help, but their condition is that this case must be withdrawn," he explains.

The nun refused the offer and told the Father they won't withdraw any case. "We must get justice. We don't desire to lose any life, or sell our dignity," she said.

The priest, who allegedly acted as a mediator, continued his attempt to persuade the nun and said, "I've understood the situation. I respect your feeling. I was just giving my suggestion. So they are actually thinking about buying some land for this in Erumely and Ranni area. So in that case, you can stay in that compound itself."

Asian Age has not been able to verify the authenticity of the leaked audio clip.

According to reports, the nun said she filed the police complaint against the accused Bishop after the church authorities turned deaf ears in the past.