The bill provides for rigorous life imprisonment and a fine between one and Rs five lakh on perpetrators if the victim dies. 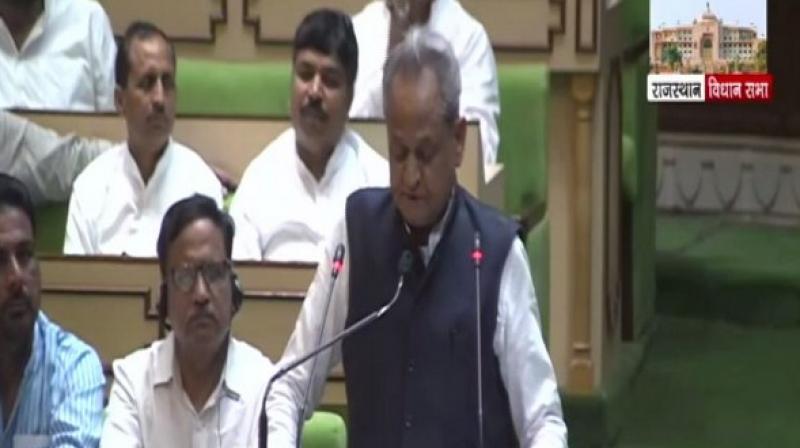 Rajasthan was in national limelight for the lynching of Pehlu Khan, a cattle trader, on April 1, 2017. (Photo: ANI)

Jaipur: In a bid to curb incidents of lynching, the Congress government in Rajasthan on Tuesday introduced a stringent bill in the state Assembly that provides for life imprisonment and heavy fines to those convicted in fatal mob lynching incidents after speedy trials.

Introduced by Parliamentary Affairs Minister Shanti Dhariwal, the Rajasthan Protection from Lynching Bill, 2019 aims at prevention and punishment by appointing special judges for speedy trial and rehabilitation of the lynching victim families.

The bill provides for rigorous life imprisonment and a fine between one and Rs five lakh on perpetrators if the victim dies.

Rajasthan was in national limelight for the lynching of Pehlu Khan, a cattle trader, on April 1, 2017.

"If a victim suffers injuries, the convict will be punished with jail term up to seven years and a fine up to one lakh," it said.

The bill mandates jail term up to 10 years and fine of not less than Rs 25,000 to the convict if the victim is seriously injured in the incident.

Those who are found hatching conspiracy for the crime of assisting the criminals will be treated as accused in the case.

To ensure unbiased and transparent action in these cases, the bill mandates that no officer below Inspector General will investigate the cases of mob lynching.

To prevent such incidents, the bill mandates the appointment of coordinators at state and district levels. "Director-General of police will appoint a state coordinator who will not be an office below the rank of Inspector General of Police," the bill reads.

Superintendent of Police of each district will work as a district coordinator and will be assisted by one of the Assistant Superintendents of Police.

District collectors have been given special powers that can prohibit any event or gathering if he feels it can lead to any such incident.

For rehabilitation of the mob lynching victims, safe camps would be established with proper security arrangement, the bill said.