India   All India  30 Jul 2019  Triple talaq: What does Tripal Talaq Bill stand for?
India, All India

Triple talaq: What does Tripal Talaq Bill stand for?

After passing through Rajya Sabha, the bill gets legality which would be taken before the President for his assent. 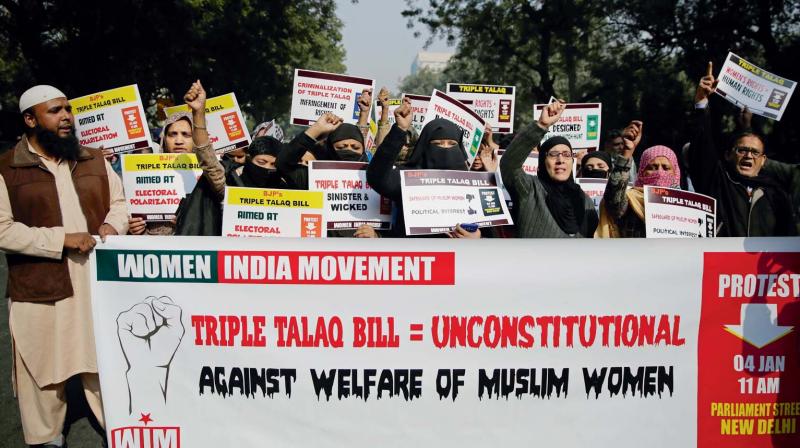 The bill also renders Talaq-e-Biddat the status of a cognisable offence that empowers police to arrest the offender without requiring a warrant. (Photo: Representational image)

New Delhi: After Supreme Court declared ‘triple talaq’ as unconstitutional in 2017, the Upper House of Parliament has passed Muslim Women (Protection of Rights on Marriage) Bill, 2019 on Tuesday. This gives legality to the bill which would be taken before the President for his assent.

What is Triple Talaq Bill?

The Triple Talaq bill makes declaration of divorce (talaq-e-biddat) in any form (written, oral or electronic) illegal. Talaq-e-Biddat refers to the pronouncement of talaq (divorce) three times by a Muslim man in one sitting to his wife calling an instant and irrevocable divorce.

The bill also renders Talaq-e-Biddat the status of a cognisable offence that empowers police to arrest the offender without requiring a warrant.

The complaint, however, will be registered only when a complaint is made by an aggrieved woman or any of her blood relative. This is done to keep the misuse of bill in check.

A Muslim man pronouncing instant triple talaq will be jailed for a term of three years under the bill. The offence would be bailable and the power to grant bail vests with a magistrate. The bail, however, would be granted only after the aggrieved woman is heard.

The triple talaq bill also provides scope for reconciliation without undergoing the process of ‘nikah halala’ if the two sides agree to stop legal proceedings and settle the dispute.

Nikah halala refers to a practice under which a divorced Muslim woman has to marry another man and consummate the marriage and get a divorce. Only then she would be eligible to remarry her former husband.

The bill provides for maintenance to a woman divorced through Talaq-e-Biddat for her and dependent children. The amount of subsistence allowance will be determined by the magistrate.

Under the bill, the divorced Muslim woman is entitled to seek custody of minor children which would be determined by a magistrate.