India   All India  30 Jul 2021  Government will set up centres for women in crisis internationally: Smriti Irani
India, All India

Government will set up centres for women in crisis internationally: Smriti Irani

The event has been organised by the Kailash Satyarthi Children's Foundation 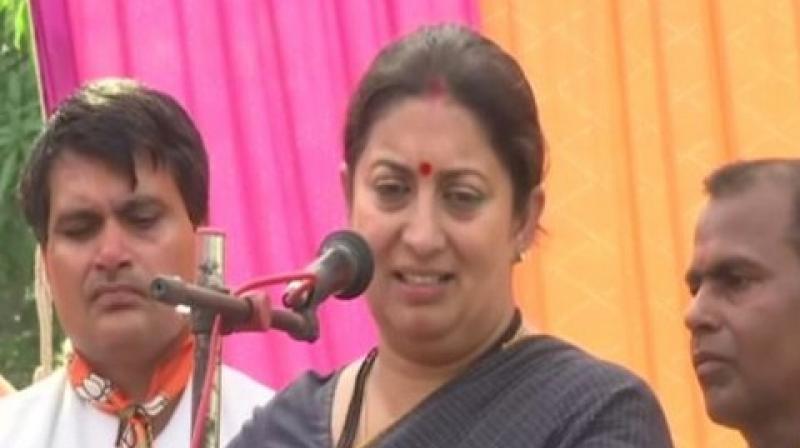 Irani also highlighted that the bill has been drafted. (Photo: PTI/File)

New Delhi: To tackle the human-trafficking nexus operating globally, the Union government has decided to set up centres where women and children who are in crisis internationally can get protection, said Women and Child Development Minister Smriti Irani on Friday.

With the passage of the Trafficking in Persons (Prevention, Care and Rehabilitation) Bill, 2021, the government will enhance cooperation internationally to address cross-border trafficking, she said at the inaugural session of the national consultation on the elimination of human trafficking.

The event has been organised by the Kailash Satyarthi Children's Foundation and its sister group Bachpan Bachao Andolan.

"On international nexus with regard to trafficking, in partnership with the External Affairs ministry, we have decided to set up centres for women who are in challenge or in crisis internationally so the women and children get protection.

"I am sure that with the passage of the bill we will enhance that cooperation internationally as well so that cross-border trafficking, which is a major concern with regard to trafficking of women and children, can also be addressed," Irani said.

About the bill, Irani said it is for the first time that "we are looking at trafficking in its entirety as an organised crime which means that the bill will now propose a comprehensive list of different forms of trafficking which are aggravated in nature and accordingly enhance punishment for the same".

The Union Minister said that in many conversations it was highlighted how the Indian Penal Code (IPC) does not live up to the expectation of the populace with regard to the stringent punishment when it comes to human trafficking.

"In our conversation with the Home Ministry we are assured that appropriate amendments to IPC will be made to complement the seriousness with which the government proposes the trafficking bill," she added.

"The important one aspect I would like to flag is the issue of mandatory reporting and punishment for those who neglect to report a case of trafficking when it comes before them.

"We have provided provision for closure of premises and eviction of offenders from properties who indulge in purchase from trafficking. In the bill, we have provided for an institutional arrangement to combat trafficking, apart from rescue, recovery, rehabilitation, repatriation and reintegration of victims," she said.

Irani also highlighted that the bill has been drafted with a victim-centric approach to provide for the safety and protection of witnesses and entitle them to basic benefits and services and prescribe measures for their further care, relief and compensation.

"Special courts designated in districts for speedy trials and justice is delivered within a limited time frame that has also been proposed within the exacts of the bill," she said.

Out of the Nirbhaya Fund, the government has monetarily provided support to every state government to ensure that every district has an anti-human trafficking unit specially dedicated to this cause, Irani said.

"Additionally, we have ensured that we enhance helpdesks across the country in so far as those police stations that are still uncovered. Women helpdesks are now mandatorily and monetarily supported under the Nirbhaya fund," she added.

Nobel Laureate Kailash Satyarthi said human trafficking is not only one of the most heinous crimes against humanity but is also one of the most lucrative illicit trades in the world where there is a price tag on human beings.

"We have to build awareness about this bill because we feel this is going to be one of the best pieces of legislation in the world. There will always be room for improvisation that we will keep on working on but today is the time we have to put an end to this menace and build awareness about issues and law," he said.

"We have to build that sense of collective responsibility... moral accountability is the key to ensure freedom and dignity of every child, every human and every citizen," he added.