Mumbai gauged a whopping 298 mm of rainfall, the highest in a day in August since 1997. 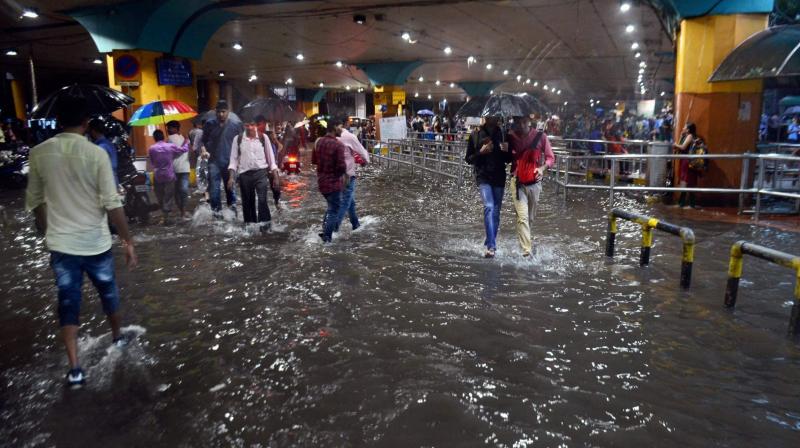 Mumbai: Moderate to low rainfall persisted in parts of Mumbai on Wednesday morning. On Tuesday, five people were killed in Mumbai and Thane due to heavy incessant downpour.

A 32-year-old woman and a teenage girl died in Thane. The woman fell into a 'nullah' filled with rainwater in Kalwa and drowned while 14-year-old Gauri Jailwar died after falling into a swollen drain near a mall in Thane.

The police have also received news that a man has gone missing after falling in a manhole. Though his identity is not officially verified, he could be Dr Deepak Amarapurkar, head of Gastroenterology, Bombay Hospital. He went missing from the India Bulls building in Lower Parel.

The city recorded 298 mm of rainfall, the highest in a day in August since 1997.

Schools and colleges will be closed on Wednesday.

Maharashtra Chief Minister Devendra Fadnavis tweeted to say that people in and around Mumbai are "advised to stay back home unless there is an emergency" but "essential services" will be up.

Local train services in Mumbai in most of the lines have resumed while more buses have been pressed in for the convenience of people who are still stranded.

Flights which were either delayed or cancelled on Tuesday after heavy downpour are plying as per schedule on Wednesday.

People have parked their cars on road after incessant rain and waterlogging on Tuesday.

Several houses were also damaged. The city witnessed very heavy rains in which several trees were uprooted and vehicles washed away. The downpour also caused flooding in low-lying areas.