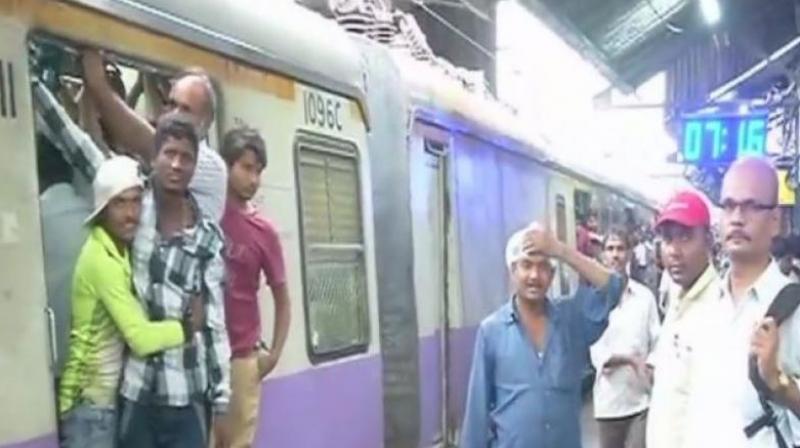 Mumbai locals back on track after rains left the city standstill. (Photo: ANI)

Mumbai: Just before the first light of dawn at 4:30 am, office goers stranded at their workplaces - which got converted into makeshift dormitories for the night - made their way to the Churchgate station in south Mumbai to reach home.

Shortly after the suburban train services resumed after the rain fury, Churchgate and Chhatrapati Shivaji Maharaj Terminus (CSTM) witnessed scenes resembling any evening when offices shut for the day and commuters flock to return home.

People started trickling out on the streets and made their way to the two primary train terminuses - CSMT on Central Railway and Churchgate on the Western Railway.

After the heavy downpour subsided overnight, commuters were seen crowding these stations, in expectation of taking a train back home and resting peacefully on a day virtually declared as an unofficial holiday by the state administration.

The place of work turned into place of stay or a dormitory for the office goers and almost all the offices, especially those of state-run institutions that dominate the south Mumbai area, hosted employees for the night.

Discussions about the night spent away from home, the adjustments which had to be made and the odd body ache were common as people descended on railway stations in the commercial district.

With no information on easing of rail traffic forthcoming, there was anxiety on what fate awaits. It transpired to be a mixed bag. While the Western Railway services were up albeit in a limited manner, it was status quo on Central Railway's both Main Line and Harbour Line till 7:26 am when the first train chugged out for Kalyan from CSMT.

Predictably, there was disappointment and a few irate women passengers entered the station master's office in the heritage Chhatrapati Shivaji Maharaj Terminus.

"People are trying to enter station master's offices at various stations including CSMT asking for services to resume at earliest. We have deployed additional force where necessary," a Government Railway Police official said.

A few hundred people had to be pushed back and the station manager's office had to be cordoned off.

Outside, in the Nagar Chowk precinct, every passing vehicle was being waived at and asked for a lift.

"I have been stuck at office since last evening and now have to pay extra to get back home to Thane," said a 40- something woman who works for a state-run bank and paid a hefty Rs 200 per seat for the 35-km journey till neighbouring Thane.

However, not everybody was as lucky as her and the crowds kept swelling. Some blamed the lack of coordination between the railways and BEST undertaking which runs local public transport buses.

"If CR knew that services cannot be resumed by morning, why did not they deploy additional buses as the rains have stopped and roads were clear?" asked an irate insurance employee.

In what seemed like an ad-hoc arrangement, BEST deployed a few buses to ply from CSMT to suburban Ghatkopar, through the Eastern Freeway, with priority to ferry women.

For some, it was a long haul with train services being stuck near Ghatkopar but for the lucky ones, the wish to return home was unfulfilled as another challenging day dawned.