Communication from China came following heavy rains in that country after which Tsangpo was in spate. 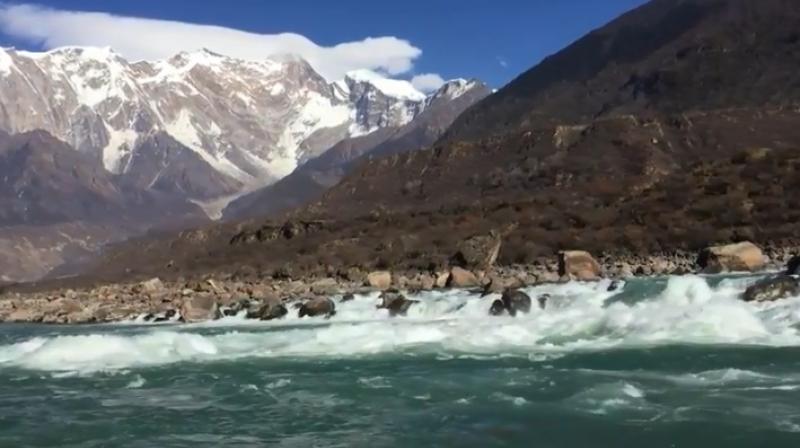 According to a Chinese government report, 9020 cumec of water was discharged into Tsangpo/Brahmaputra river as observed at various stations yesterday. (Youtube Screengrab)

A senior official of the Union Water Resources Ministry said it was an unprecedented situation on the Chinese side where Tsangpo broke a 150-year record with swollen waters and hence China has shared the information with India.

Ering said the communication from China came following heavy rains in that country after which Tsangpo was in spate.

"The local authorities told me that the Chinese government has conveyed to Indian government that there is a possibility of floods in parts of Arunachal Pradesh. We have taken the alert seriously and cautioned people," he told PTI.

According to a Chinese government report, 9020 cumec of water was discharged into Tsangpo/Brahmaputra river as observed at various stations yesterday.

The MP said Siang has been calm till today but people in East and Upper Siang districts were cautioned.

"My own village is in danger of getting flooded," he said.

The Union Water Resources Ministry official said Indian experts have analysed the data shared by China and came to the conclusion that the effect may not be so strong in the country even through it was an alarming situation in China.

This was the first time this year that China shared the river data with India, the official said.

China began sharing data from May 15, while it started sharing data for the Sutlej river from June 1. The sharing of data came after the two sides held talks over the issue in March this year. The data is shared twice daily until October this year.

Last year, China had said that the hydrological gathering sites were washed away due to floods. It coincided with the 73-day Doklam stand-off that took place during the peak monsoon period.

The Brahmaputra originates from China's Tibet and flows into Arunachal Pradesh, where it is called Siang, and then Assam, where it becomes Brahmaputra, and later drains into the Bay of Bengal through Bangladesh.

"They shared data as per the MoU between us. We analaysed the data and found that there was no danger on the Indian side," said another ministry official.

There is nothing to panic as the Central Water Commission (CWC) has reported that the water level at the Grand Canyon of Tsangpo on August 14 was 8070 cumec and an increase should not inflict severe damages, Arunachal government officials said in Itanagar quoting the Chinese communication.

The unusually high waves in the Siang river have created fear among the people of the two Arunachal Pradesh districts and the administration has cautioned the people to refrain from venturing into it for fishing, swimming and other activities, an official said.

Large scale erosion was seen on the left bank of the river towards Lower Mebo of Mebo sub-division in East Siang district in the past few days and 15 houses were  washed away in Seram-Ramku village, the official said.

In October last year Siang river had suddenly turned turbid which prompted the Lok Sabha MP from Arunachal Pradesh to write to Prime Minister Narendra Modi requesting him to take up the matter with China.

Ering had alleged the water turned muddy following construction activity by China in the upstream.