The NDA government in its first term had failed to get a buyer for the national carrier. 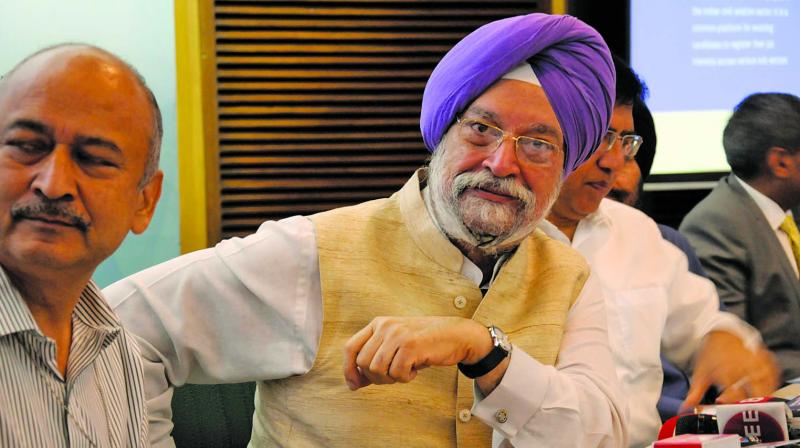 New Delhi: While underlining that the government should not be in the business of running airlines, Union minister for civil aviation Hardeep Singh Puri on Thursday said that the NDA government is determined to sell national carrier Air India at the
earliest.

The minister said that the process in this regard has begun and a meeting of senior officials with Cabinet secretary has already taken place to prepare for the meeting of a group of ministers (GoM) headed by Union home minister Amit Shah.

The NDA government in its first term had failed to get a buyer for Air India. However, the minister said the government is better prepared now. “There are lessons to be learnt from  the past. This one (attempt) is going to succeed. There will be no wavering this time. It will be a quick decision by the GoM. People are keen on acquiring Air India and whoever buys will be able to operate in a commercial way,” Mr Puri said during an interaction with media. He added that the government is determined to get the best possible deal in a time-bound manner.

Taking about getting more investment in the aviation sector, the minister said that the NDA government is open to 100 per cent Foreign Direct Inves-tment (FDI) in this area. He added that the aviation market in India is opening up and more people and skills will be needed. The talked about government plans to make India a Mainte-nance, Repair and Overhaul (MRO) and leasing hub for aviation.

Meanwhile, talking abo-ut statements by Pakis-tani minister over closing of air space for India and the threat perception pertaining to Jammu and Kashmir, the Union minister said that there are appropriate mechanisms and forums to deal with this issue.

“We do not want to anticipate developments. Every country will take its own measures. We will put in place all measures desig-ned to deal with these  situations, issues and challenges, particularly in the security area,” he said.