At UN, Sushma shames Pak on terrorism, rules out talks 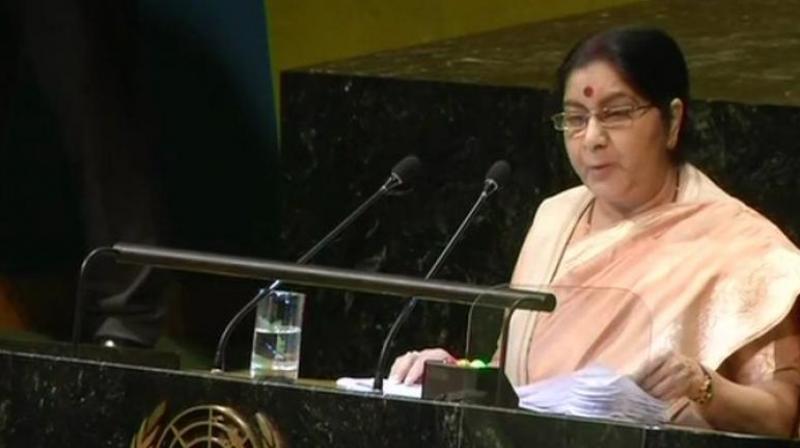 Swaraj asked world leaders how can India pursue dialogue with a nation that “glorifies killers” and allows the Mumbai attack mastermind Hafiz Saeed to “roam free” with impunity.

New Delhi: Exposing Pakistan’s double-speak on the dialogue process, external affairs minister Sushma Swaraj on Saturday shamed Islamabad on the issue of terrorism in her speech  at the UN General Assembly in New York, saying Pakistan “spreads terrorism and is also an expert in denying it”.

Dismissing Pakistan’s allegation that India is sabotaging the peace talks process, Ms Swaraj asked world leaders how can India pursue dialogue with a nation that “glorifies killers” and allows the Mumbai attack mastermind Hafiz Saeed to “roam free” with impunity.

“We are accused of sabotaging the process of talks. This is a complete lie. We believe that talks are only rational means to resolve the most complex of disputes. Talks with Pakistan have begun many times. If they stopped, it was only because of their behaviour,” said Ms Swaraj in her speech in Hindi.

Climate change, UN Security Council reform and the social schemes of the Narendra Modi government were other issues she touched upon in her 22-minute-long speech.

On Pakistan’s allegations that New Delhi is not serious about a dialogue, Ms Swaraj said, “Pakistan PM Imran Khan wrote a letter requesting for a meeting of the two foreign ministers. But just hours later, three cops in J&K were abducted and killed. Does this reflect the intent for a dialogue? Should a meeting take place in such a scenario?,” the minister asked, raking up Pakist-an’s active role in allowing terrorism to breed in South-Asian region.

She also pointed out how she herself had visited Pakistan in 2015 for a dialogue but within days of her visit, Pathankot airbase in India was attacked by terrorists in January 2016.

“The demon of terrorism has reached almost every country. India has been suffering too. In our case, it has been spread by a country across the border. That country not only spreads terrorism but is also an expert in denying it,” she said. “The world has recognised Pakistan’s true face. The Financial Action Task Force (FATF) has put Pakistan on its watchlist,” Ms Swaraj added, referring to the “grey listing” of Islamabad earlier this year by the global inter-governmental body that combats terror financing.

Ms Swaraj also used the “Osama bin Laden stick” to beat Pakistan and shame it in front of the world, pointing out how Islamabad had sheltered him while claiming to be a friend of the US. Bin Laden — the mastermind of the 9/11 attack in New York — was killed in 2011 by US Navy seal commandos in Abbotabad, not far from the Pakistani military headquarters at Rawalpindi.

“Pakistan had sheltered him while claiming to be a friend of the US. But Pakistan behaved as if they did nothing wrong,” she pointed out as two Pakistani diplomats heard her speech with a grim expression.

Ms Swaraj also asked how the international community would fight the menace of terrorism when the UN has not been able agree on the definition of terrorism. “Although India proposed a Comprehensive Convention on International Terrorism (CCIT) as early as in 1996, it has been stuck,” she said, urging a consensus on the matter.

Ms Swaraj pointed out that this delay had allowed a situation where Pakistan terms terrorists on its land as freedom fighters and claims their cruelty to be bravery. She pointed out how Islamabad had issued postage stamps eulogising terrorists, a reference to slain terrorist Burhan Wani who was killed by Indian troops in Kashmir in July 2016.

The minister also pushed for reforms in the UN and warned that the world body risks falling into irrelevance. “In the absence of fundamental reforms multilateralism will collapse if the world body remains ineffective,” she said.

For long, India has been calling for reform of the UN Security Council along with Brazil, Germany and Japan. The four countries support each others’ bids for permanent seats in the top UN body.

“I began by highlighting the unique and positive role of the UN, but I must add that step by slow step, the importance, influence, respect and value of this institution is beginning to ebb,” she added.

Apart from terrorism, Ms Swaraj identified climate change as the other big threat facing humanity. She said developed nations — which had caused damage to the environment during their path to progress — have a duty to help developing nations.

Ms Swaraj also spoke about social sector schemes of the Modi government, including health insurance, direct transfer of money into accounts of the underprivileged and cooking gas connections that help women.