The separate demonstrations announced by the two senior leaders have exposed the fault line among the frontline leaders of the party. 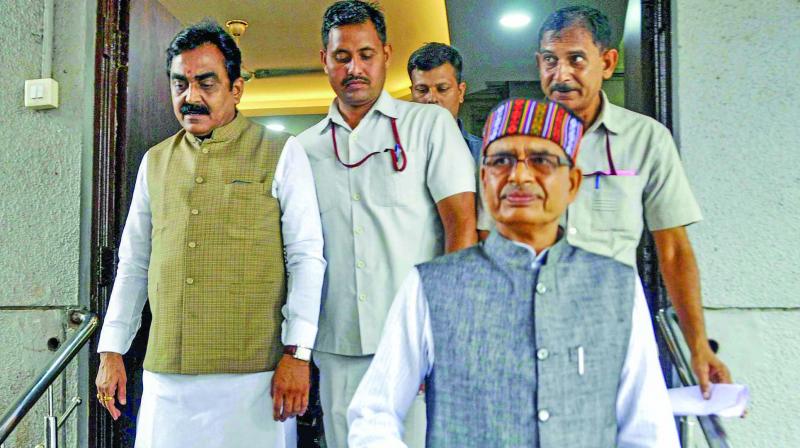 Bhopal: Internecine war in the Madhya Pradesh BJP unit, simmering since the party was dislodged from power by the Congress in the November 2018 Assembly polls, has come to the fore ahead of organisational elections in the saffron outfit, scheduled to begin by the end of this month.

The organisational polls on September 22 will culminate in election of state party president by the end of December, according to a spokesman of the BJP here.

The first sign of factionalism in the party here came to the fore last week when former chief minister and BJP national vice-president Shivraj Singh Chouhan announced an "independent" programme to launch agitation in two Assembly constituencies in MP in protest against the indifferent attitude of Kamal Nath government towards the flood-affected farmers.

Mr Chouhan, who has started touring flood-hit areas in the state since last week, has declared that he would be constrained to resort to sit-in demonstration in the two Assembly constituencies of Sehore and Narasinghpur if the chief minister Kamal Nath failed to announce measures to mitigate plight of farmers who suffered crop loss due to the current floods induced by the heavy monsoon rains in the areas.

The separate demonstrations announced by the two senior leaders have exposed the fault line among the frontline leaders of the party.

“The senior leaders of BJP in MP are hardly seen sharing a common platform in public ever since the party lost power in the state eight months ago, giving an impression that all was not well in the MP BJP unit. They have been busy playing the game of one-upmanship in cutting each other's rivals to size,” a senior party leader disclosed to this newspaper here requesting not to be quoted.

The party’s MP unit is broadly divided in four factions each led by Mr Chouhan, Mr Singh and former ministers Gopal Bhargav and Narottam Mishra respectively, sources said, adding, “Bickering among the factional leaders has left the party in disarray”.