Congress leader Jitin Prasada on Monday claimed that he was put under preventive custody. 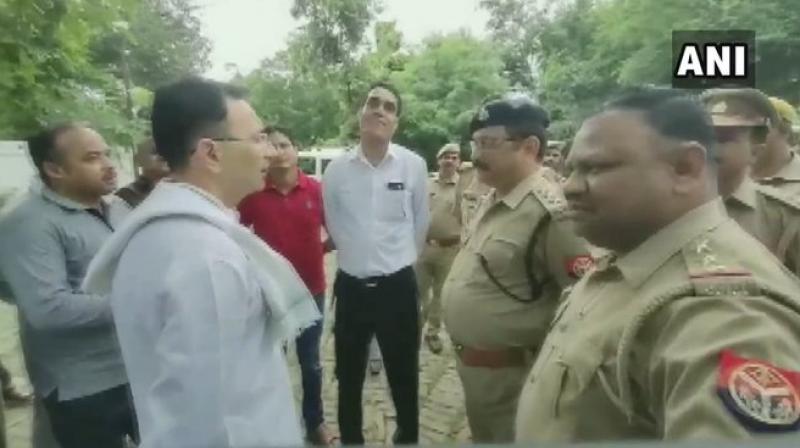 Prasada was seen questioning police over the denial of holding the padayatra and asked whether or not holding a protest seeking justice for a person was wrong. (Photo: ANI)

Shahjahanpur: Congress was denied permission to hold a march in support of the jailed law student who accused the BJP's Chinmayanand of rape.

Congress leader Jitin Prasada on Monday claimed that he was put under preventive custody after the district administration denied permission to hold a padayatra in support of the Shahjahanpur rape victim.

The 'nyay yatra' by the Congress was aimed in solidarity with the girl student who had levelled rape allegations against BJP leader and former union minister Swami Chinmayanand.

"UP is no Kashmir yet today I am in preventive custody for simply wanting to highlight the plight of the Shahjahnpur rape victim. This BJP govt has no qualms in quashing an individual's fundamental rights!" he said in a tweet.

Prasada was seen questioning police over the denial of holding the padayatra and asked whether or not holding a protest seeking justice for a person was wrong.

"Congress today wanted to hold a march to highlight the plight of the Shahjahanapur rape victim but the local administration is not allowing it. Tell me how is it a violation of the law? It is unfortunate," Prasada told reporters.

Prasada had accused the Yogi Adityanath-led government of crushing voices of dissent. In his Twitter post, the Congress leader attached a letter of the District Magistrate Shahjahanpur addressed to the party's district committee president Kaushal Mishra.

According to the letter, the public meeting was to be held on Monday at 10 am followed by a 'padayatra' from Congress office in the town and was to go through several places like Sadar Bazaar, Bahadurganj and Ghantaghar on the way to Lucknow.

"This is to inform you that currently festival season is going on and Navratri, Durga Puja and Dusshera functions are being held. The proposed route of the 'padayatra' passes through busy markets due to which it is not possible to give police protection. Also, the place cannot accommodate nearly 2,000 people during the public meeting," the letter said.

"As Section 144 (which prohibits the gathering of more than four people) is imposed in Shahjahanpur district, it is not possible to organise a programme of such a large scale. Hence, the administration has denied permission to hold the 'padayatra'," it said.

A local court in Shahjahanpur had on September 20 sent Chinmayanand to 14 days of judicial custody for allegedly sexually assaulting the law student. He was charged with an offence not amounting to rape, stalking and criminal intimidation.

Earlier, during the SIT interrogation, the student had accepted that she instigated one of her friends to send messages to Chinmayanand demanding extortion money. After her confession, she was arrested and produced before the court, which sent her to judicial custody for 14 days.

The law student went missing on August 24 after a video of her alleging that a person from 'Sant Samaj' had threatened to kill her and her parents went viral on the social media.

The girl, who studied in a college run by Chinmayanand, had later testified before a local court that she was repeatedly raped by the BJP leader for over a year. She said that the accused recorded the incidents on camera and used them to blackmail her.

Chinmayanand, who was the Minister of State for Home in the Atal Bihari Vajpayee government, was admitted to Lucknow's Sanjay Gandhi Post Graduate Institute of Medical Sciences on September 23 after he complained of chest pain.