Heavy rain takes life of 110 in four days across country

Weather department said could be the longest delayed withdrawal of Monsoon. 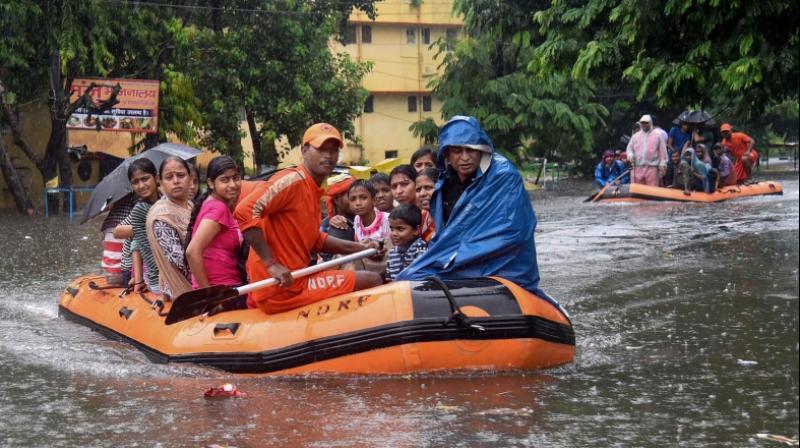 In Uttar Pradesh alone, at least 79 people have died since Thursday. (Photo: PTI)

New Delhi: Nearly 110 people died in rain-related incidents across the country in the past four days, with Uttar Pradesh reporting the maximum deaths, while incessant rainfall in Bihar has badly hit normal life, with almost all areas of capital city Patna under knee-deep waters and people struggling to meet their daily needs.

In what the weather department said could be the longest delayed withdrawal of Monsoon, rains continued to lash several states including Bihar, where at least 13 people have died over the past 48 hours, while large swathes were inundated, affecting railway traffic, healthcare services, schools and disrupting power supply.

In Uttar Pradesh, at least 79 people have died since Thursday.

According to a state government report, 25 people died on Saturday, 18 lost their lives on Friday and 36 the day before.

In Gujarat, three women drowned after their car was swept away at a flooded causeway in Rajkot district on Sunday following heavy rains in several parts of Saurashtra region, officials said.

As many as 13 deaths were also reported on Saturday from Uttarakhand, Madhya Pradesh and Rajasthan in incidents triggered by heavy rains.

Meanwhile, IMD Director General Mritunjay Mohapatra said on Sunday that the four-month monsoon season which is officially ending on Monday is unlikely to withdraw even till the weekend.

In hard-hit Bihar, a bird's eye view of state capital Patna made the city appear like a huge lake dotted with concrete structures.

Private hospitals, medical stores and other shops were submerged in waist-deep water.

While people waded through the waterlogged streets, boats of Nation Disaster Response Force (NDRF) were also out in some areas of the city rescuing residents.

According to the weather department, the state capital has received more than 200 mm of rainfall since Friday evening, which Disaster Management Department Principal Secretary Pratyay Amrit described as "totally unexpected".

He also expressed concern over water having entered many power sub-stations which may affect the functioning of sump houses.

The East Central Railway, headquartered in Hajipur, said close to 30 trains have been cancelled and many others short-terminated or diverted on account of the flooding of Patna and Danapur junctions and many other smaller stations.

Chief Minister Nitish Kumar, after from a video conference with district magistrates, told reporters, "We are making all possible efforts.

I would appeal to the people of the state to have patience and courage.

" "In the event of water entering a sub-station, power has to be disconnected to avoid major casualties.

But the availability of fuel is finite and if heavy rainfall persists, pumping out water from inundated streets could be hampered drastically," Disaster Management Department Principal Secretary Pratyay Amrit said.

Three people died in Bhagalpur when the boundary wall of a temple collapsed in Barari police station area while as many people were buried alive when a house caved in at Khanjarpur area, District Magistrate, Pranav Kumar said.

In Danapur, on the outskirts of Patna, a one-year-old girl and three women died when a tree fell on an autorickshaw carrying them.

Three deaths also were reported from Bhabhua, the district headquarters of Kaimur, where continuous rain led to the collapse of two mud houses.

In Nawada, efforts were on to trace three locals who were reportedly swept away in the current.

Though the reason for the cancellation was not mentioned in the statement, sources said the decision was taken owing to heavy rain across the region.

Train services on the Ballia-Chhapra section of the North Eastern Railway (NER) was disrupted due to heavy rain on Sunday.

Public Relations Officer, NER, Mahesh Gupta said seven trains on this section has been cancelled, while six trains have been diverted.

In Kolkata also, several streets have been waterlogged due to heavy rains.

In J&K, a 54-year-old sub inspector of the BSF is suspected to have drowned in a swollen river along the International Border (IB) in Jammu, officials said on Sunday.

They said the Border Security Force has launched a massive search operation and also intimated their Pakistani counterparts after Sub-Inspector (SI) Paritosh Mondal went missing from the bank of a river near the Jaikishan post in Arnia sector on Saturday around 6 pm.

The SI, belonging to the 36th battalion of the force, is said to be accompanied by two constables of the force and were out for an area domination patrol when he went missing.

The river is in spate due to heavy rains, they said.