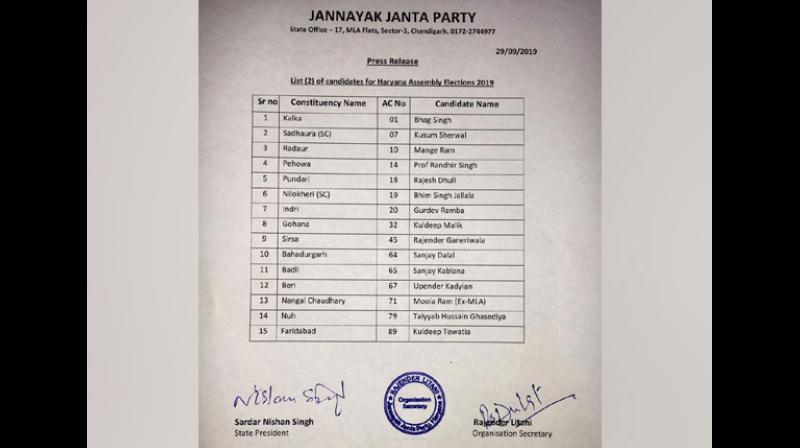 In the second list, the party has announced candidates for 15 seats including Faridabad, Kalka and Sirsa. (Photo: ANI)

Chandigarh: The Jananayak Janata Party (JJP) on Monday released the second list of its candidates for the ensuing Haryana Assembly elections to be held on October 21.

In the second list, the party has announced candidates for 15 seats including Faridabad, Kalka and Sirsa.

On August 11, BSP and JJP had entered into a poll alliance but the same was later called off.

The JJP had contested the Lok Sabha polls in alliance with the Aam Aadmi Party (AAP) where it had to suffer a humiliating defeat being unable to secure even a single seat. JJP will contest on 50 seats and BSP will contest on 40 seats.

On Sunday, Tej Bahadur Yadav, the BSF constable who was dismissed from service after he had released a video in 2017 on quality of food served to soldiers, joined JJP in presence of party chief Chautala.

Haryana has the strength of 90 seats out of which 17 are reserved for SCs and none for STs. There are 1.82 crore registered voters in the state out of which 1.07 lakh are service voters.

The process of filing nominations for Haryana began on September 27.

The last date of filing nominations is October 4 and the scrutiny will take place on October 5. The candidates can withdraw their nomination till October 7.

The counting of votes will take place on October 24.