Though, the Ballia District jail has a capacity of 350 inmates, but is overcrowded with nearly 950 prisoners at present. 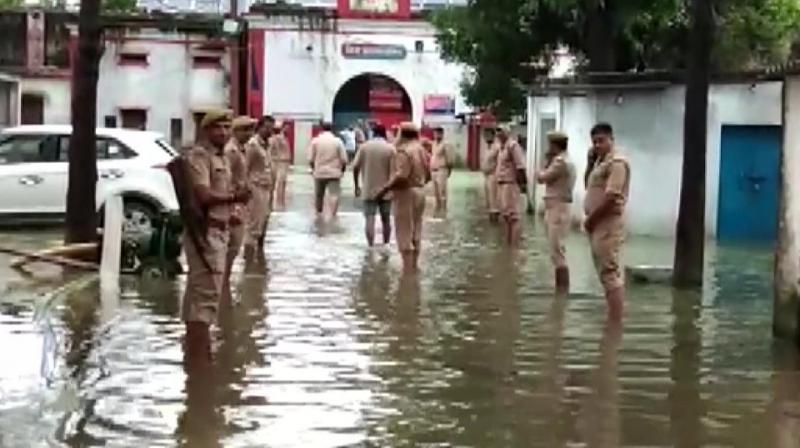 The jail building is in a dilapidated condition and officials said water-logging inside it is not new. (Photo: ANI | Twitter)

According to IANS report, Ballia District Magistrate Bhavani Singh Khangaraut, “Water logging from five inches to one foot has been reported from all the barracks of the district jail. In view of the ground realities of the jail, the matter was reported to state government and prison department. We have received approval of authorities concerned to shift 450 prisoners to Azamgarh jail. Approval for shifting more prisoners to Mau and Ambedkar Nagar jails is awaited.”

"After four days of continuous rain the jail has been flooded. There are heavy floods outside also, because of which we are not able to pump water outside jail buildings," Ram Ashray, Additional District Magistrate (Balia), said.

Ashray said they have been ordered to shift 450 of the 950 prisoners from here to the jail in Azamgarh, told news agency PTI.

The jail building is in a dilapidated condition and officials said water-logging inside it is not new. The jail is located in a low lying area while the height of roads in the area has increased by several feet in recent years.

Though, the Ballia District jail has a capacity of 350 inmates, but is overcrowded with nearly 950 prisoners at present.

Nearly 90 people have died in five days after rains ravaged parts of eastern UP. In addition to Ballia, Jaunpur and Varanasi districts of the state are among the worst-affected, reported NDTV.

The weather office has warned of heavy rain and thundershowers in both eastern and western parts of Uttar Pradesh over the next 24 hours. Similar warnings have been issued for Bihar and Jharkhand.