The private luxury bus, carrying around 70 passengers, tipped over at Trishulia Ghat after the driver lost control. 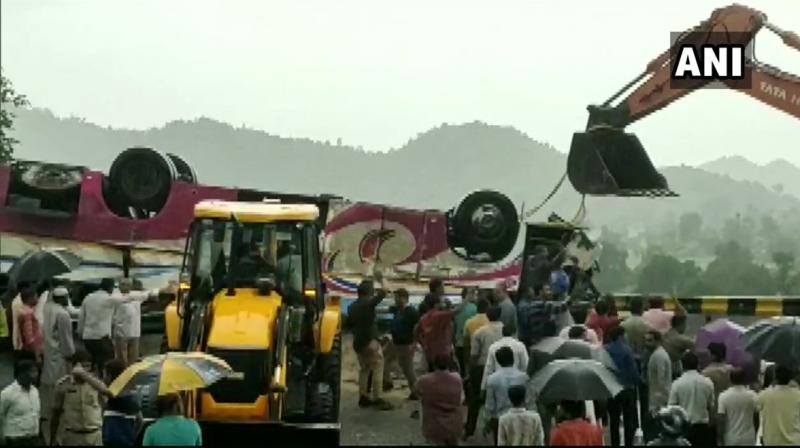 These injured passengers were referred to Danta town's referral hospital and Palanpur civil hospital, said Rajian. The SP along with district collector Sandip Sagale rushed to Danta hospital after the accident. (Photo: ANI)

Ahmedabad: At least 21 passengers were killed and more than 50 others injured when a packed private luxury bus overturned in a hilly area in Banaskantha district of North Gujarat on Monday evening, said officials.

The ghastly mishap took place at Trishulia Ghat, a hilly patch on the Ambaji-Danta road near Ambaji town of Banaskantha district, around 160km from here, when the victims were returning home after visiting a temple, they said. The private luxury bus, carrying around 70 passengers, tipped over at Trishulia Ghat after the driver lost control over the vehicle due to heavy rain in the area, Banaskantha district SP Ajit Rajian said.

He said, "21 persons travelling in a private bus died after the vehicle overturned at Trishulia Ghat. "The bus driver lost control due to heavy rain as the tyres slipped on the road when brakes were applied. We pulled out 53 persons alive from the bus using a crane."

These injured passengers were referred to Danta town's referral hospital and Palanpur civil hospital, said Rajian. The SP along with district collector Sandip Sagale rushed to Danta hospital after the accident.

According to Sagale, 35 of the 53 injured are in critical condition and referred to the civil hospital at Palanpur, the administrative headquarters of the district, from Danta. "We have deployed more doctors at both the hospitals to treat the injured and carry out post-mortem. All the passengers were residents of Anklav village of Anand taluka and returning after visiting Ambaji temple," said Sagale.

The Trishulia Ghat is the same spot, where nine people had lost their lives in June last when a multi-utility vehicle overturned after its brakes failed at a sharp turn. Sagale said the state government plans to convert the road passing through the Trishulia Ghat into a four-lane pathway.