Traders and transporters have been observing a spontaneous strike for the past 56 days and all efforts to persuade them have failed. 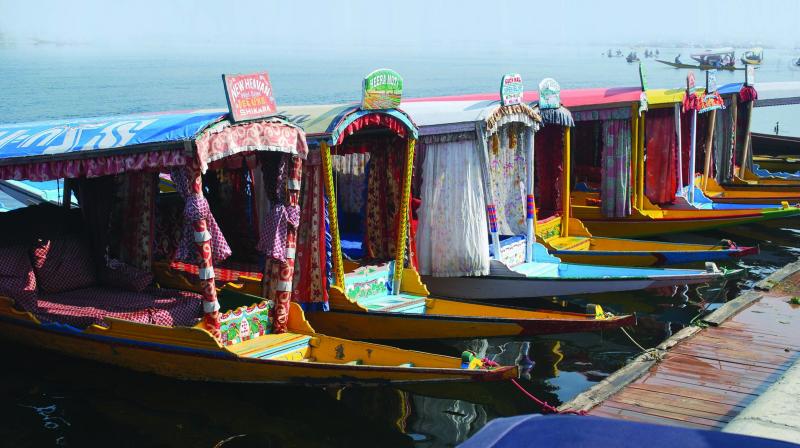 While public transport remains off roads, increased movement of private cars and other vehicles enlivens various areas during daytime.

Srinagar: Notwithstanding the rosy picture portrayed by the authorities, common people living a nightmare because of frequent clampdowns and shutdowns. The situation, particularly Srinagar, Anantnag, Pulwama, Shopian, Kulgam, Baramulla, Ganderbal and Sopore, is grim. The hard situation has thrown many out of work.

For the past three weeks, Nazir Ahmed Akhoon has been visiting a fuel station in Srinagar's Sonawar area every evening to buy 50 litres of petrol. He then sells it at `100 per litre, mainly to bikers, during the daytime when all the fuel stations in and around the Kashmiri capital remain shut.

“It fetches me about `1,200 which is sufficient for me and my family to subsist on for a day or two,” said 34-year-old Akhoon who worked as a Sumo (cab) driver, but had been rendered out of job by the prolonged official clampdowns and spontaneous shutdowns in Kashmir Valley. It was the 56st day of mayhem on Tuesday.

Like Akhnoon, hundreds other residents who live on “hand-to-mouth” arrangement have set up fuel kiosks on roadsides and footpaths across Srinagar. Many others too have taken up similar menial jobs or are working as labourers at construction sites to earn livelihood for themselves and their families. The hard situation in the Valley has thrown thousands out of work.

Notwithstanding the rosy picture of the state portrayed by the authorities, common people go through a nightmarish existence because of frequent clampdowns and shutdowns. The situation, particularly in the towns of Srinagar, Anantnag, Pulwama, Shopian, Kulgam, Baramulla, Ganderbal and Sopore is grim.

Traders and transporters of the Valley have been observing a spontaneous strike for the past 51 days and all efforts by the administration to persuade them to return to work have failed. The government has, however, succeeded in "encouraging" street vendors in select Srinagar areas to resume their business.

Also for the past couple of weeks, shops and other businesses are routinely opened in various areas of Srinagar and other towns for three hours from 6 am "to enable people to buy eatables and other essential commodities". This came after posters from an obscure group appeared in the Valley, approving the activity. Pharmacies and ATM booths remain open in several areas during daytime also. Groceries located in labyrinth streets and dark alleys of central Srinagar are opened again in the evenings.

In many parts of Srinagar and other towns, street vendors are returning to work. At places, makeshift vegetable and fruit markets are also set up now. All these activities have brought some respite to both the sellers and buyers.

While public transport remains off roads, increased movement of private cars and other vehicles enlivens various areas during daytime. Fuel stations are opened in select Srinagar areas mainly in the evening. However, on a day when security restrictions under section 144 CrPc are re-imposed in Srinagar, the capital city wears a deserted look.

Snapping of mobile telephone and Internet services and other means of communication has made it almost impossible for people to communicate with the outside world. They connect with their neighbourhoods mainly through word of mouth and, occasionally, they use mosque loudspeakers for it. Restoration of landline phone connectivity has changed things slightly but only for those who use the service.

“It is the survival instinct of the Kashmiris which keeps them going in such a crisis,” said political analyst Prof. Sheikh Showkat Hussain. Asserting that the people of the Valley are used to live in such situations, he said, “The Valley witnessed blood-spattered unrest for more than five months after the killing of (militant commander) Burhan Wani in July 2016, but the people still managed to survive.”

The Kashmiris traditionally store rice, pulses, edible oils, etc. in sufficient quantities to last for weeks or even months. The practice is driven by a long spell of severe winter. In fact, dried vegetables are added to the list ahead of the three Chillas, the harshest part of winter consisting of three months beginning on December 21.

In current situation, vegetables, rice, milk and some commodities are transported to Srinagar and other towns before the first light and are quickly sold to the residents at makeshift bazaar. Also, the old Srinagar is connected through alleyways and canals with Dal and Nigeen lakes which have a plenty of floating vegetable gardens.

As it happened during the unrests of 2008, 2009, 2010 and 2016, Bayt al-mals have been set up at mohalla or locality levels to help people. Those already existed but were out of action have been revived. People who can afford are donating in cash and kind to make these effective. A Bayt al-mal or ‘House of money’ or ‘House of Wealth’ historically is a financial institution responsible for the administration of taxes in an Islamic state and which also served as a royal treasury for the caliphs and sultans managing personal finances and government expenditures.

In some cases, those who have already lost purchasing power are issued eatables and other essential goods free of charge through Bayt al-mals or the well-heeled come forward to buy these for them.

Yet the daily-wagers, vendors, non-skilled labourers and those others existing on “hand-to-mouth” arrangement have suffered enormously due to the stalemate. The restrictions have deepened economic woes and affected every aspect of life in the Valley. With no tourists arriving, those associated with the industry such as houseboat owners, shikarawallas, taxi operators and hoteliers have lost their living completely. But this sector accounts for only 6.98 per cent of the state's GDP, contrary to the general notion that tourism is the backbone of its economy.

It is horticulture and agriculture which are the mainstay of the rural economy of Kashmir, providing employment to a large number of inhabitants. The government recently launched the market intervention scheme for apples with the objective of providing "optimum" prices to the growers of the Valley. This, they said, will help the `8,000-crore horticulture sector with which nearly 7,00,000 families are directly or indirectly associated. However, many farmers have complained that the remuneration fixed for various grades of apple by the authorities is “not enough”.