The video has since been shared by numerous people on Twitter, with several asking the government and the NDRF to reach out to him. 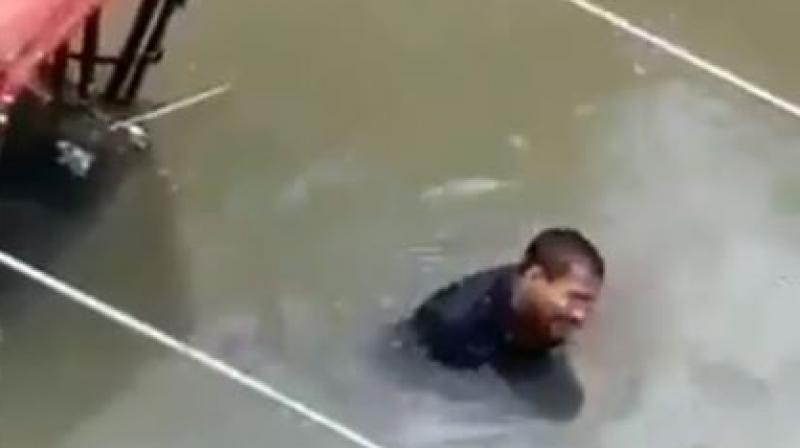 However, one particular video from Patna has gone viral which showed a rickshaw puller stranded in chest-deep water. (Photo: Screengrab)

Bihar: Heavy rains resulting in floods have brought Bihar to a standstill. #PatnaFloods and #BiharFloods have remained the top trends in the country for the past two days, with people urging the government and elected officials to take note and necessary measures to bring relief to those who are stranded or suffering.

However, one particular video from Patna has gone viral which showed a rickshaw puller stranded in chest-deep water.

In the video, the man was seen completely drenched, stuck and unable to leave his rickshaw behind. He was seen crying and asking for help in the video. The people recording the video asked him to leave the rickshaw parked near their home and promised to keep an eye on it. The man, however, refused to abandon his rickshaw.

Location: Rajendra Nagar, Patna, Bihar
Man refuses 2let go of his bread and butter, his rickshaw. Cries, while trying to push it through deep water logged lane. NDRF teams r in Patna, CM is taking stock. But no 1 to hear his painful cry. This is wht total helplessness luks like. pic.twitter.com/CP2kLqPg1U

The video has since been shared by numerous people on Twitter, with several asking the government and the NDRF to reach out to him.