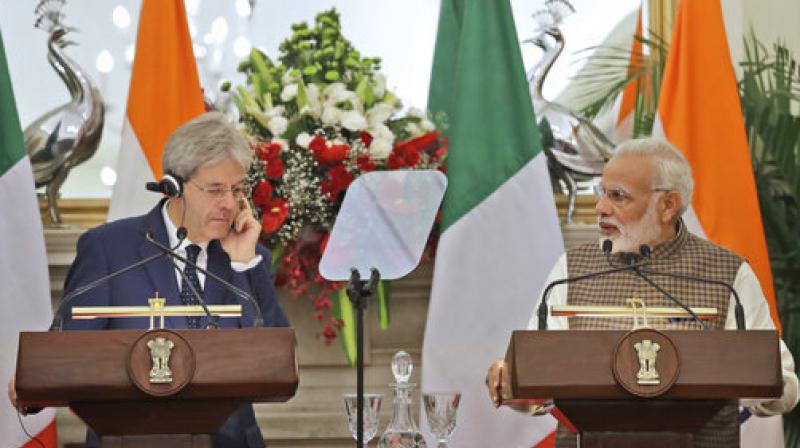 New Delhi: India and Italy on Monday inked six pacts, including on boosting cooperation in the energy and trade sectors, after extensive talks between Prime Minister Narendra Modi and his Italian counterpart Paolo Gentiloni on key issues such as terrorism and cyber crime.

The two leaders also discussed ways to strengthen the bilateral political and economic relations, apart from deliberating on strategic international and regional issues.

Addressing a joint media event with Gentiloni, Modi said they discussed wide-ranging issues, including the challenges posed by terrorism and cyber crimes, while agreeing to enhance cooperation to counter them.

Modi also noted that there was a huge potential for enhancing India-Italy trade ties. After the Modi-Gentiloni meeting, the two sides signed six pacts to deepen cooperation in the fields of railways sector safety, energy and promoting mutual investments, among others.

Italy is India's fifth largest trading partner in the EU with a bilateral trade of USD 8.79 billion in 2016-17, as per official figures.

India's exports to Italy were at USD 4.90 billion, while its imports were at USD 3.89 billion, resulting in a trade imbalance of USD 1 billion in favour of India. In the first four months of fiscal 2017-18, bilateral trade has reached USD 3.22 billion.

Ahead of his meeting with Modi, the visiting leader had described his visit as an opportunity to make ties between the two countries stronger. Earlier, External Affairs Minister Sushma Swaraj called on Gentiloni and discussed issues of mutual interest, ministry spokesperson Raveesh Kumar said.

Gentiloni's visit is the first prime ministerial trip from Italy in more than a decade.

The India-Italy diplomatic ties were hit badly after two Italian marines -- Latorre Massimiliano and Salvatore Girone -- on board a ship named Enrica Lexie, were arrested for allegedly killing two Indian fishermen off the coast of Kerala in 2012.

Italy claimed the ship was in international waters and that only the International Tribunal for the Law of the Sea (ITLOS) should apply. It also moved the international court. While Latorre returned to Italy in September 2014 following an order of the Supreme Court issued on health grounds, Girone was allowed to go in May 2016.

They are now in Italy, pending the verdict by the arbitration court at the Hague. The Indo-Italy diplomatic row also impacted the European Union's relationship with India.