The nun was gangraped at a convent on March 14, 2015 allegedly by a group of suspected Bangladeshi nationals. 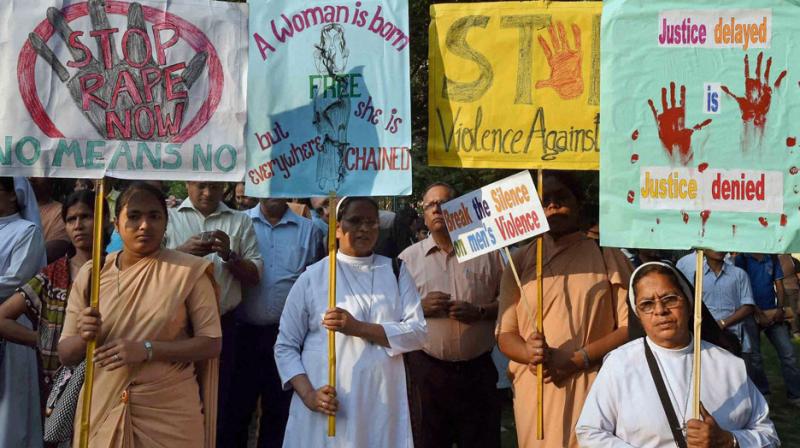 Nuns take part in a rally in Kolkata to protest against the gangrape of a 72-year-old nun at Ranaghat. (Photo: PTI)

Kolkata: The verdict in the gangrape case of a 72-year-old nun at Ranaghat in 2015 in Nadia district would be pronounced on November 7 after the trial of six accused concluded in a city court on Monday.

The nun was gangraped at a convent on March 14, 2015 allegedly by a group of suspected Bangladeshi nationals, who had then decamped with cash from the safe of the convent.

While six persons were arrested by the state CID which probed the case, one of the accused is absconding.

The examination of witnesses and pleadings by lawyers representing the accused and the prosecution concluded before Additional District and Sessions Judge Kumkum Sinha in Kolkata. The judge said the verdict would be delivered on November seven.

Investigation in the case was handed over to the CID by the state government soon after the incident. The trial was shifted from a court in Ranaghat to the Kolkata sessions court in May 2016 by the Calcutta High Court on a petition by the nun.

The nun, who had relocated to Delhi following the incident, had sought transfer of the case to Kolkata stating that she feared for her safety as the accused allegedly had strong links in Ranaghat.

The accused have been charged with and tried for gangrape, dacoity, attempt to cause death or grievous hurt, voluntarily causing hurt by dangerous weapons or means and criminal conspiracy.