BJP took out marches to offices of Superintendent of Police in all district headquarters to condemn government for arresting agitators. 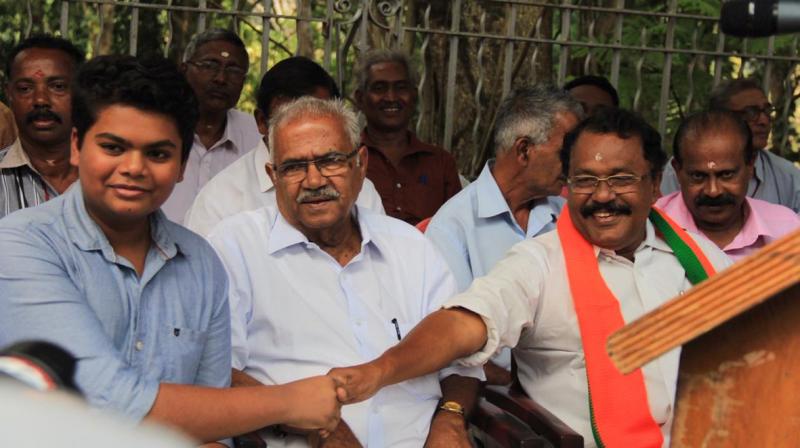 Addressing party workers in Thiruvananthapuram, BJP state president P S Sreedharan Pillai alleged the ruling CPI(M) was on the road to 'liquidation' and the party's graph was coming down. (Photo: Twitter | @BJP4Keralam)

BJP cadres also took out marches to offices of the Superintendent of Police in all district headquarters to condemn the government for arresting the agitators.

Addressing party workers in Thiruvananthapuram, BJP state president P S Sreedharan Pillai alleged the ruling CPI(M) was on the road to "liquidation" and the party's graph was coming down.

Veteran Marxist leader M M Lawrence's grandson was among the protesters. Over 3,500 people have so far been arrested and 529 cases registered in connection with the protests and demonstrations against the implementation of the Supreme Court verdict allowing women of all age groups into the Lord Ayyappa temple.

BJP national president Amit Shah, who was in Kerala on October 27, had extended full support to the devotees protesting the entry of women of all ages into the shrine. The saffron party had announced that it would be taking out a 'Rath Yatra' from Kasaragod to Pathnamthitta, where the Sabarimala temple is located, from November 8 to 13 to "save the customs and traditions" of the hill shrine.

The temple had witnessed high drama after around a dozen women in the 10-50 age group were prevented by protesting devotees from entering it after the temple doors were opened for monthly pujas between October 17 and 22. The Lord Ayyappa temple's three month-long pilgrim season is commencing from November 17 and the state government has reiterated that all devotees would be allowed to offer prayers at the shrine.

The temple will also open for a day on November 5 for a special puja.