Meeting Debashish Bhattacharya, an exponent of the modified slide guitar 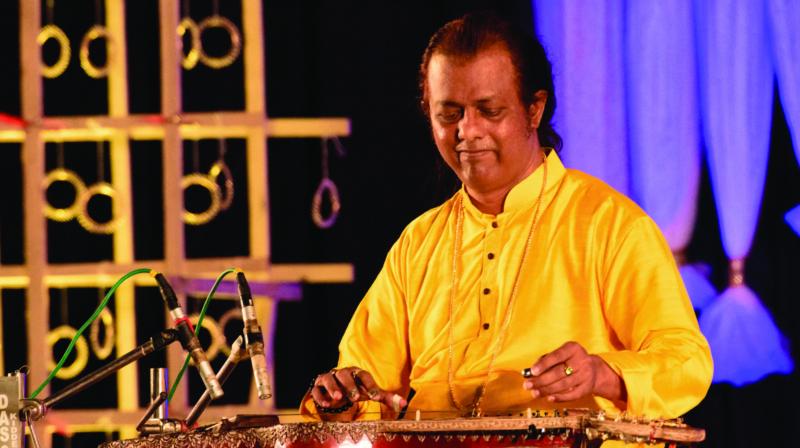 Known equally for his exciting collaborations with world-famous musicians, including John McLaughlin and guitarist Jerry Douglas, who have played his compositions on his raga and jazz fusion music album Beyond the Ragasphere, Pandit Debashish Bhattacharya is a leading Maihar gharana exponent of the modified slide guitar. Nominated for a Grammy in 2009, the maestro has had several compositions, making it to the Billboards Top 10, and the Songline magazine Top 10. His Indian classical music concerts are exciting, the raga content sound, the layakaari innovative and his practised hands a true delight.

The maestro enthralled a packed audience at the recently held Akashwani Radio Sangeet Sammelan in Delhi. With his typical grace, he ended the concert 10 minutes before the allotted time as “the artiste before me took 10 minutes extra, and the senior who will play after me thus may get 10 minutes less”. His Raga Bageshwari was charming; the embellishments delicately added, the short duration necessitating his showing only glimpses from his vast repertoire. The next Manjh Khamach was not the usual lyrical delineation one hears — instead he played a robust composition of Ustad Allaudin Khan, ending with tremendous speed and crystal clear four-stroke “jhala”.

Interestingly, he shared that he is now reversing his comparative neglect of India as a concert stage for the last few decades — in his words:“I flew in from the UK last night and after the concert am leaving tonight for a concert in Cardiff. Though I am now in my mid 50s, I have not been as active in India as I should have been. I started playing abroad from a very young age, and was really busy coping with my schedule. But now I am more interested to play in India to give back to my own people, and familiarise people with this great instrument.”

Indeed, his version of the Hawaiian slide guitar has a beautiful sonorous sound, and one is instantly arrested by his very touch. He plays with an authority born of years of practice. I asked him about his instrument. Debashish said, “The first person to play Indian classical music on the slide guitar was Pandit Nalin Mazumdar from Allahabad, who was a disciple of Ustad Allaudin Khan. But it was my Guruji Pandit Brij Bhushan Kabra who really popularised it. The slide guitar is without doubt truly now an Indian classical instrument, with the scope to incorporate all techniques needed to unfold our raga music.”

“My modification of the slide guitar is called ‘chaturangi’, which was made by me when I was 15, in 1971.Three different people helped me create this instrument. Today, I employ 12 craftsmen to make guitars for the students who train with me. It takes four months to make two guitars. The chaturangi has 24 strings, with 12 resonating strings (‘tarab’ strings, which on the chaturangi are like harp strings, not the usually placed ‘tarabs’, under the main wires) six main strings like in the haiwain guitar. There are also two ‘chikaris’ which are in the front of the instrument, not the back. I play these using different plucking techniques, my Guru always used the thumb. I use the fingers, and he accepted the way I played.”

I asked him why his playing techniques differed from his Guru. Debashish replied, “My playing techniques on the guitar were set before I met my Guru Pandit Brij Bhushan Kabraji, at the age of 21. I stayed with him for 10 years in Ahmedabad, and one of his conditions was not to play in concert during that time. ‘Tabhi to mera sur lagta hai (that’s why my notes have feeling)’. It’s due to my Guru’s blessings. I created a guitar for my Guru, with ‘tarab wires’ (resonating sympathetic strings) in 2010 after he stopped playing concerts. He returned it to me saying you will use it more now. What a great man he was, and a very spiritual person!”

I am indebted to so many Gurus — firstly my parents, both vocalists from the Gwalior and Patiala schools. We lived in a remote village with no electricity. We used to listen to classical music only through the radio. It’s been a long journey. Then I learnt from Shri Haradun Roy Choudhury and afterwards from the late Acharya Gokul Nagji of the Vishnupur gharana.”

Continuing his reminiscences, he said, “Along the way, I created two more instruments — the ‘gandharvi’ is the first double string slide guitar in the world. I play this only for niche audiences, as it a more reflective instrument with depth. It’s the sort of instrument you should listen to with your eyes shut! It has the depth of a veena. The small ukelele type four string slide guitar was created by me in 2002, which I named Anandi after my daughter. I use this more for light or fusion pieces.”

I asked why he played the “chaturangi” more. His reply was rueful: “I find audiences have very short attention span, and as they are more familiar with the sound of the ‘chaturangi’, I play it more often. Also it lends itself to all the techniques required in an Indian classical music instrument — gamaks, ‘dir dir’ work, etc.”

A prolific composer, I asked Debashish which his favourite work was. He said, “Well, in 2009 I did an album called Calcutta Chronicles, which traced the music one could have heard in Kolkata in the last 400 years, including Portuguese, flamenco and Indian classical. I composed all nine pieces, three were based on Indian classical ragas. When I play classical music, it’s without gimmicks and extraneous elements, but I love experimenting too. In the Carnatic tradition, I have collaborated with the legendary U. Sriniwas, recently with Shashank Subramaniam and Ganesh Kumaresh. Western guitarists I admire include Derek Trucks, Bob Rossman and Martin Simpson.”

“I also organise an international slide guitar festival in January in Kolkata every year, with participation by guitarists from all over the world who engage in workshops and concerts. I also have an academy to teach slide guitar techniques. It’s a pity for guitarists to have to learn the sitar and techniques when studying music in Indian colleges.”

I asked him what was next. He replied with his usual charm and humility, “In a way, this instrument that I have created is my Guru. It keeps teaching me new ways of handling, new ways to approach music. I am still learning even now how to play it the best. On the content, well, Ustad Ali Akbar Khan sahib used to always say, ‘Don’t look at the audience, look inwards. Music should be like a prayer’.”

Shailaja Khanna writes on music, musicians and matters of music.