Meanwhile, former chief ministers Mehbooba Mufti and Omar Abdullah have pledged to fight a decisive battle against the Centre 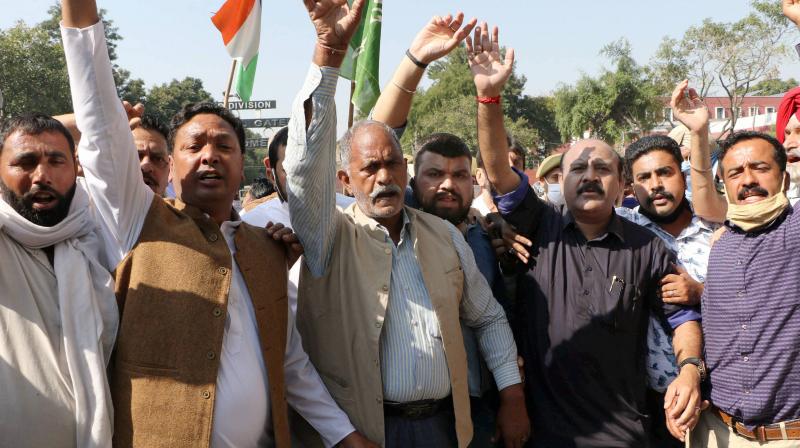 SRINAGAR: Twin capitals of Srinagar and Jammu on Thursday witnessed more street protests against the Centre’s introducing a new set of land laws in Jammu and Kashmir to make all Indian citizens eligible to own immovable properties in the Union Territory.

Meanwhile, former chief ministers Mehbooba Mufti and Omar Abdullah have pledged to fight a decisive battle against the Centre’s contentious moves which, they alleged, are aimed at looting land and resources of J&K and wreck its identity.

The police swung into action as dozens of PDP workers attempted to take out a procession from the party headquarters here against the new land laws for J-K. The witnesses said that gun-wielding policemen assisted by the CRPF came in the way of the protestors and detained them.

Soon, the party president tweeted, “PDP office in Srinagar sealed by J&K admin & workers arrested for organising a peaceful protest. A similar protest was allowed in Jammu so why was it thwarted here? Is this your definition of ‘normalcy’ that’s being showcased in the world? @PMOIndia @HMOIndia @manojsinha.”

She claimed that some of the PDP workers were arrested by the police from their homes in the middle of last night so that they could not participate in the planned protest demonstration.

In Jammu, the workers of Apni Party whose leadership is reported to be very close to the corridors of power at the Centre held a protest demonstration against the new land laws and demanded an immediate rollback of these “so that the fears, anxieties and apprehensions of the people are removed.”

She said that she and her party colleagues were “not just Twitter leaders” and warned the government: “Today you stopped us with the help of (security) force but next time this will not happen.” She added, “You flaunt your power against Kashmiris by making these new land laws, changing employment retirement policies and other legal criteria for providing domicile certificates to non-J-K citizens. If you are really so powerful use your might against China which has occupied land in Ladakh.”

Her one time political bête noire Omar Abdullah while addressing party workers said that had all the political parties of J-K united earlier they wouldn’t have seen this day. “I regret it,” he said and added that the Centre has left no stone unturned to weaken and divide Kashmiris. “Now, our fight is to defend ourselves, our identity and our future,” he said.

He asserted, “No matter whoever in Delhi says that they have integrated Kashmir successfully with India, Kashmiris are still being discriminated against.” He said that outsiders are restricted to purchase land in many states of India but the Centre “has its eyes on the land and other resources of J-K.” He asked. “Why are we termed as anti-national and terrorists when we are only trying to defend our land and our rights?.”

He regretted that J-K mainstream politicians who have always followed the footsteps of Delhi and sought peaceful means to solve the Kashmir issue have been disowned by it and are termed anti-national now. He then asked, “If they want us to leave mainstream politics, they should clearly state it.”

Abdullah said that the fight against the Centre’s “onslaught” is not for one week or one month but will go on for a long time and “no one knows how many people will lose their lives during the process”. He added, “If we are defeated in this fight then we will be left of nowhere.”