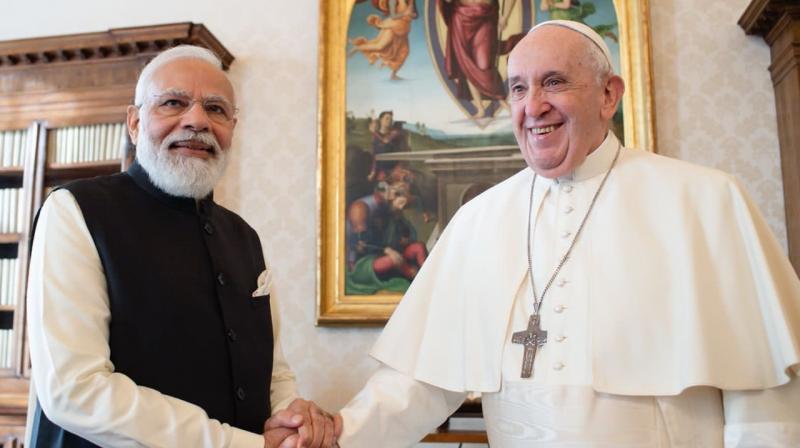 PM Modi and the Pope discussed a wide range of issues aimed at making our planet better such as fighting climate change and removing poverty. (Photo: Twitter)

New Delhi: At a historic “very warm and very personal” meeting and “private audience” granted by the Pope on Saturday at the Vatican, Prime Minister Narendra Modi invited Pope Francis to visit India and the invitation was “accepted with pleasure”, New Delhi said, in a statement, adding that the Covid-19 pandemic and climate change figured in the discussions. On receiving the invitation from PM Modi who told the Pope, “Please visit India at your earliest convenience”, Pope Francis exclaimed, “You have given me the greatest gift. I look forward to visiting India.”

At a briefing in Rome later in the evening and in response to a query, Foreign secretary Harsh Vardhan Shringla told reporters that there were absolutely no issues pertaining to religious freedom in India or any other “extraneous issues” that came up at the meeting. He added that the meeting” between PM Modi and Pope Francis went on for an entire hour although it was scheduled for only 20 minutes.

PM Modi presented a silver candle-stand to the Pope and a book on India’s commitment to protecting the environment while the Pope presented a bronze plaque to PM Modi that contained a quote from the Old Testament that the “desert shall become a garden”. India is home to the second largest Catholic population in Asia. The foreign secretary said it was a “very personal meeting” between PM Modi and Pope Francis that was marked by warmth and candour and that there was a “sense of great bonhomie and closeness that radiated” from both after the meeting, adding that “the Pope has great sentiments” about India. “The Pope graciously accepted the invite to visit India,” Mr Shringla said.

PM Modi briefed the Pope about “India's success in administering one billion Covid-19 vaccination doses” and the Pope “appreciated India’s assistance to countries in need during the pandemic”, New Delhi also said. PM Modi and the Pope discussed a wide range of issues aimed at making the planet better such as fighting climate change and removing poverty. The foreign secretary said the discussions between PM Modi and the Pope were of “topical relevance to societies around the world” such as the Covid pandemic and climate change and that it was “devoid of extraneous issues”. Pope Francis also told PM Modi about the various artefacts at the Vatican like a museum  housing centuries of spiritual objects of reverence, he added.

“Prime Minster extended an invitation to His Holiness Pope Francis to visit India at an early date, which was accepted with pleasure,” New Delhi said, adding that “India is home to the second largest Catholic population in Asia”. PM Modi tweeted, “Had a very warm meeting with Pope Francis. I had the opportunity to discuss a wide range of issues with him and also invited him to visit India”.

The last Papal Visit to India had taken place by Pope John Paul II more than two decades ago in 1999 during the tenure of the then NDA Government led by then prime minister Atal Behari Vajpayee who had later visited the Vatican in June, 2000.

PM Modi on Saturday also met the Vatican’s secretary of state, Cardinal Pietro Parolin in a separate meeting on which the Vatican said that “the cordial relations between the Holy See and India were discussed” in a “brief conversation”.

In its statement on the two meetings, the Vatican said, “Today, 30 October, the Holy Father Francis received in audience, in the Vatican Apostolic Palace, the Prime Minister of the Republic of India, Mr Narendra Modi. Subsequently, in the Secretariat of State, the Indian Prime Minister greeted His Eminence Cardinal Secretary of State Pietro Parolin, and His Excellency Archbishop Paul Richard Gallagher, Secretary for Relations with States. During a brief conversation, the cordial relations between the Holy See and India were discussed.”

In its statement from New Delhi, the ministry of external affairs (MEA) said, “His Holiness Pope Francis received Prime Minister Narendra Modi in a private audience at the Apostolic Palace in the Vatican on Saturday, 30 October 2021. This was the first meeting between an Indian Prime Minister and the Pope in more than two decades. In June 2000, Late Prime Minister Shri Atal Bihari Vajpayee had last visited the Vatican and met the then Pope, His Holiness John Paul II. India and The Holy See have friendly relations dating back to the establishment of diplomatic relations in 1948. India is home to the second largest Catholic population in Asia.”

The MEA added, “During today’s meeting, the two leaders discussed the Covid-19 pandemic and its consequences for people across the world. They also discussed the challenge posed by climate change. Prime Minister briefed the Pope about the ambitious initiatives taken by India in combating climate change as well as India’s success in administering one billion Covid-19 vaccination doses. His Holiness appreciated India’s assistance to countries in need during the pandemic.”