Had the women not shown this alertness, the terrorists would have been able to take them hostage, an Army officer said. 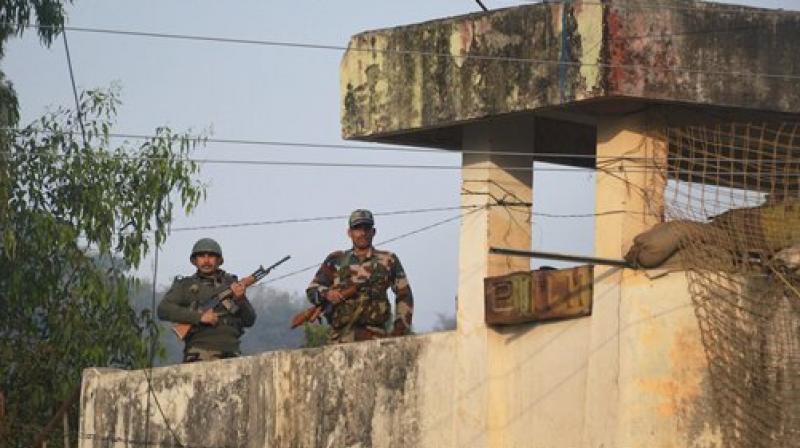 Due to the bravery of two women, who were staying in the family quarters along with their newborns, the plans of the terrorists could not materialise. (Photo: PTI)

Nagrota:  Bravery of the wives of two army officers who were staying in the family quarters helped in averting a major hostage crisis during the encounter that took place in Nagrota area of Jammu on Tuesday.

Soon after the heavily armed terrorists disguised in police uniform entered an army unit located within three kms from the headquarters of the 16 Corps, they tried to enter the family quarters where they could take the families of the soldiers and officers hostage.

However, due to the bravery of two women, who were staying in the family quarters along with their newborns, the plans of the terrorists could not materialise.

"The wives of the two army officers, who were on night duty when the encounter broke out, displayed exemplary courage as they blocked the entry of their quarters with all the household items, making it difficult for the terrorists to break into the houses," an army officer privy to the encounter said.

Had the women not shown this alertness, the terrorists would have been able to take them hostage and would have succeeded in causing massive damage to the army and the families, he said.

"The terrorists entered two buildings which were occupied by officers, families, and men. This led to a hostage-like situation. The situation was very quickly contained and thereafter, in a deliberate operation all were successfully rescued, which included 12 soldiers, two women and two babies," Defence spokesman Lt Col Manish Mehta said.

The two babies rescued are 18 months and two months old, the officer said.

However, in the rescue attempt one officer and two jawans sacrificed their lives, the spokesman said.

He said the bodies of three terrorists have been recovered and operations were in progress to sanitise the complete area.

"The terrorists forced their entry into the Officers Mess complex by throwing grenades and firing at the sentries. In the initial counter action, one officer and three soldiers of the Army were martyred," he said.

The Army has not called off the operation but suspended it as they want to be fully sure that the area has been completely sanitised.