The farmers are also demanding a special session of Parliament to discuss issues relating to agrarian distress across the country. 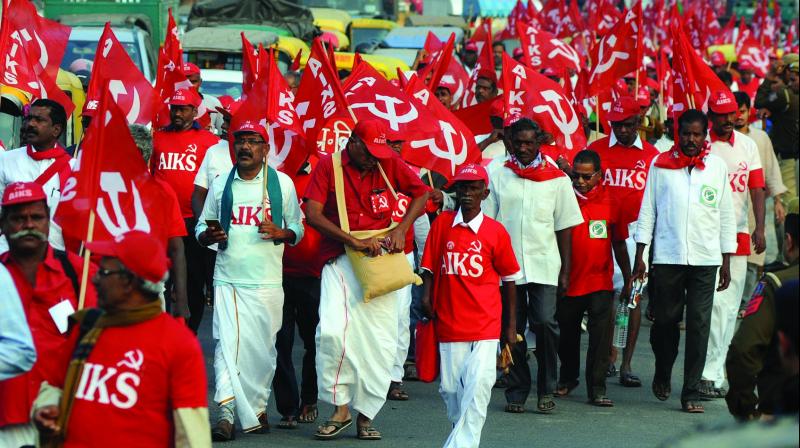 Farmers arrive for a two-day rally to press for their demands, including debt relief and remunerative prices for their produce, in New Delhi on Thursday. (Photo: Biplab Banerjee)

New Delhi: Tens of thousands of farmers converged in the national capital on Thursday for a two-day protest, including a march to Parliament to press their demands, that includes debt relief and remunerative prices for their produce.

The farmers are also demanding a special session of Parliament to discuss issues relating to agrarian distress across the country.

The farmers arrived in Delhi from all parts of the country, including Andhra Pradesh, Gujarat, Madhya Pradesh, Maharashtra, Tamil Nadu, West Bengal and Uttar Pradesh. They marched to Ramlila Maidan on Thursday from four corners of the city — the Anand Vihar, Nizamuddin and Bijwasan railway stations and Sabzi Mandi.

Under the banner of All India Kisan Sangharsh Coordination Committee (AIKSCC), which claims to be an umbrella body of 207 organisations of farmers and agricultural workers, many farmers came in trains and others packed into buses and other modes of transport.

A senior farmers’ leader said the marchers would gather at Ramlila Maidan where a crowd of about one lakh was expected. The marchers included around 1,200 members of the National South Indian River Interlinking Agriculturalists Association carrying skulls of two of their colleagues who had committed suicide. The group from Tamil Nadu threatened to march naked if they are not allowed to proceed to Parliament on Friday.

Last year, the group had staged protests at Jantar Mantar with the skulls of eight farmers who killed themselves due to farm losses. The AIKSCC is being supported by many organisations like Yogendra Yadav’s Swaraj Abhiyan, and top rural journalist P. Sainath, who has called the movement as “Nation for Farmers”.

“Women farmers greeted us this morning from Bijwasan as they are all set to embark on #KisanMuktiMarch. Join us even if you are not a farmer. Join the hands that toil to feed us. Jai Kisan!” Mr Yadav tweeted.

Lawyer Prashant Bhushan also tweeted in solidarity with the farmers. “Over 3L farmers have committed suicide in India in last 15 yrs, due to successive govts betraying them. Tomorrow 1 lakh farmers from across the country are marching to Delhi to ask for fair prices & freedom from debt. Let’s stand in solidarity with them,” he said.

During a mega Kisan Rally led by the Bharatiya Kisan Union on October 2, thousands of protestors were stopped by the police at Delhi Gate, at the juncture of Noida-Ghaziabad-Delhi. They were only allowed after midnight to march to Kisan Ghat, the memorial of former Prime Minister Charan Singh in the national capital.

Sources said Congress president Rahul Gandhi might be among the top Opposition leaders who will put forward their proposals on how their parties will address agrarian distress and issues plaguing the farming community, if voted to power in 2019, at the mega farmers’ rally on November 30. All political parties opposed to the BJP have been invited by the organisers of the November 29-30 farmers’ rally to announce promises they intend to make to save agriculture in their manifestoes for the 2019 Lok Sabha polls, All India Kisan Mahasabha general secretary Hannan Mollah said.

The AIKS, along with the Centre of Indian Trade Unions and All India Agricultural Workers Union, are the main organisers of the event. Mr Mollah said invitations have been sent to all political parties except the BJP. “We have asked parties to only send their top leaders, whose words carry weight,” he added.

AIKS sources said on Thursday, four separate groups will march to Ramlila Maidan from Delhi’s Nizamuddin, Anand Vihar, Majnu Ka Tila and Bijwasan areas. On Friday, there will be a march to Parliament House under the banner of “Nation for Farmers”, in which besides nearly one lakh farmers, ex-servicemen and youth organisations are also likely to participate. The chief demand would be that the government call a special session of Parliament to address farmers’ issues.