The incident took place on Friday after one of the trial bouts, in which Sushil defeated Parveen, for 2018 CWG. 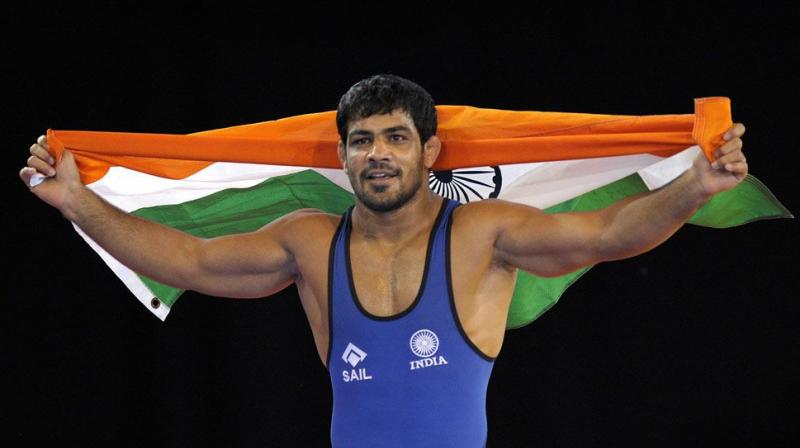 An FIR against wrestler Sushil Kumar and his supporters was lodged under sections 323 and 341 of the IPC. (Photo: File | AFP)

New Delhi: Delhi police on Saturday registered a case against two-time Olympic medalist wrestler Sushil Kumar and his supporters after a complaint was filed by Navin Rana, brother of Parveen Rana, rival wrestler who was allegedly beaten up by Sushil's supporters.

The incident took place on Friday after one of the trial bouts, in which Sushil defeated his arch-rival Parveen Rana in one of the bouts, for 2018 Commonwealth Games.

An FIR against Sushil and his supporters was lodged under sections 323 and 341 of the IPC.

Rana also alleged that Sushil' supporters had made some death threats and dared him to participate in the upcoming Pro Wrestling League.

Sushil, on the other hand, claimed that he had been bitten by Rana during the bout.

"...he bit me but no problem, it might be his tactics to stop me from performing well. All this is a part of sports," a panting Sushil told reporters after the bout.

"Whatever happened here was wrong. I condemn it. There was mutual respect after the fight ended," he added.

Sushil then tweeted to clarify his position on the incident.

It’s very unfortunate and highly condemnable what has happened today at the stadium. I do not support anyone who gets violence in between sportsmanship. My aim is to fight & win for my Nation like a true sportsman & not to win against any group or individual #JaiHind 🇮🇳

The opening day of the trials which was also attended by Wrestling Federation of India (WFI) President Brijbhushan Singh Sharan, ended on a stormy note at the Indira Gandhi Indoor Stadium in New Delhi.

The day was progressing smoothly till Sushil, who returned to the international arena after three years with a Commonwealth Championships gold, won all his bouts.

Things took an ugly turn when Rana, after losing to Sushil in the semifinal clash, claimed that the decorated wrestler's supporters beat him and his elder brother "for daring to take the ring" against him.

Incidentally, the 34-year-old Sushil had beaten Rana in the Commonwealth Championships final.

#WATCH: Scuffle broke out between alleged supporters of wrestlers Sushil Kumar and Parveen Rana at K. D. Jadhav Stadium in Delhi; reason not yet ascertained pic.twitter.com/sigLOa3koY

Sushil Kumar on Friday qualified for the 2018 Commonwealth Games after beating Jitender Kumar in the 74kg weight category during the qualification trials.

The Indian wrestler had previously won two gold medals in Commonwealth Games - in 2010 in New Delhi and 2014 in Glasgow.