India   All India  30 Dec 2019  Only Nitish can tell under what circumstances JD(U) supported CAA: Prashant
India, All India

Only Nitish can tell under what circumstances JD(U) supported CAA: Prashant

Talking about the future of BJP and JD-U alliance, Kishor said that alliance is working out well and there are no issues. 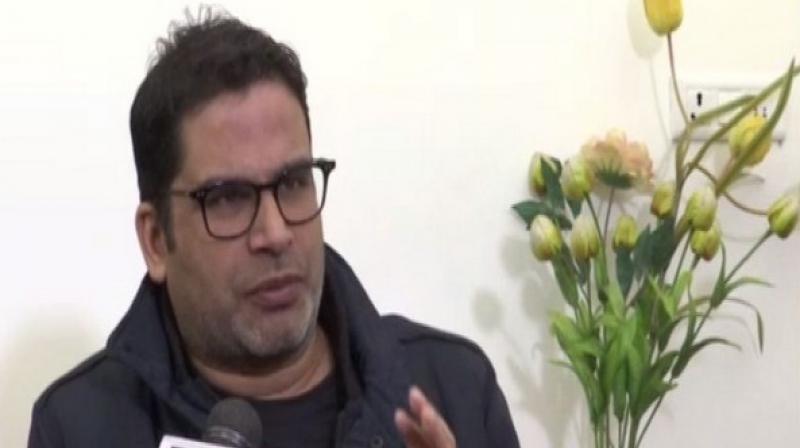 Kishore, who is one of the founder members of political strategy firm IPAC, said him working with JD(U) and advising IPAC is not an ideal situation but it has no conflict of interest. (Photo: ANI)

New Delhi: Janata Dal (United) vice president and political strategist Prashant Kishor said that it is only Bihar Chief Minister Nitish Kumar who can tell under what circumstances the party has supported the Citizen (Amendment) Bill in Lok Sabha and Rajya Sabha.

In an interview to ANI, Kishor expressed displeasure on JD(U) rendering support to the Citizenship (Amendment) Act, 2019 on social media site Twitter and has also met Nitish Kumar on the issue. Some sections of media have reported that Kishore even offered to resign.

Terming CAA as "discriminatory", Kishore said, "JD(U) opposed the Bill at every level. I want to make it very clear that JD(U)'s stance on NRC and CAA is of opposition. Check parliamentary standing committee's record, first dissent note is of JD(U). About JD(U) support during vote (in) which it has supported in both houses, under what circumstance and how JD(U) supported the Bill in both houses only Nitish Kumar ji can tell."

Kishore said that NRC should not happen at all.

"When NRC happens, crores of people, especially the poor if they could not produce required documents, they will face hardship to prove that they and their forefathers are citizens of this country, they will face a loss of income and logistical challenges. This will be a big problem for the poor. So, NRC should not happen at all and this has been JD-U's stance. Nitish Kumar ji has said that there will be no NRC," Kishor said.

"CAA is not consistent with the provisions in the Constitution which do not give you permission to give citizenship on the basis of religion. In CAA, you are using religion and giving citizenship due to which people from some religion may feel that they are facing discrimination. That itself is a big issue and it should be opposed, but when you link it with NRC then it becomes even more pervasive," he added

Talking about the future of BJP and JD-U alliance, Kishor said that alliance is working out well and there are no issues. He also dwelled on recent poll drubbing of BJP in Jharkhand elections.

Kishore, who is one of the founder members of political strategy firm IPAC, said him working with JD(U) and advising IPAC is not an ideal situation but it has no conflict of interest.

He said, "There are two things. I am not in the government of Bihar and as far as my other work is concerned, it is in public domain that IPAC is an organization which was started a few years ago. They work with different political parties. IPAC is not my personal property. This a platform for youngsters which provide an opportunity to do work with political campaign and leaders without joining political party.

"My link with IPAC is need-based. Whenever they need me only that much time I give. In Bengal, IPAC working with Mamata ji, I don't spend all the time in Bengal. I'm not involved in TMC or Bengal politics, IPAC is supporting her, whenever IPAC needs me, I assist," he added.