The seer was on life support systems since December 20 after his health condition deteriorated following a pneumonia attack. 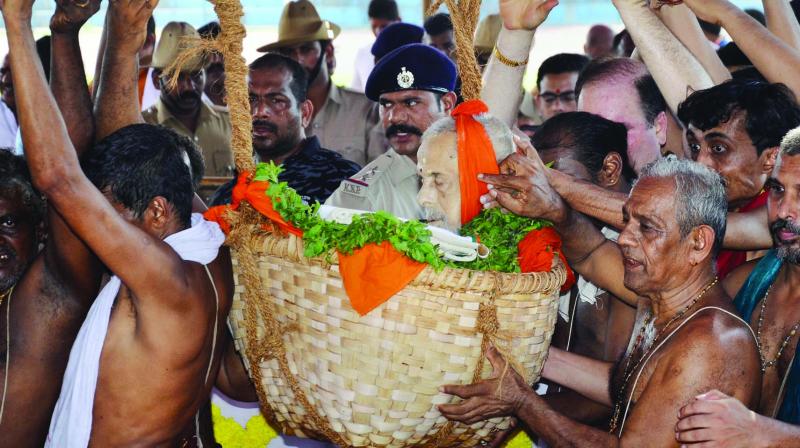 Udupi: Sri Vishvesha Teertha Swamiji of the Pejawar Adhokshaja Math in Udupi, who was a prominent face of the Vishwa Hindu Parishad’s Ram Janmabhoomi movement in the 1990s, breathed his last on Sunday morning before he could witness his dream of a spectacular Sri Ram Mandir at Ayodhya being fulfilled.

The eighty-eight-year old swamiji, the seniormost pontiff among the Madhwa seers in Udupi, played a pivotal role in the installation of the Ram Lalla idol at the temporary temple set up after the demolition of Babri Masjid in Ayodhya in 1992. He had expressed his happiness over the recent Ayodhya verdict when the land at the disputed site was handed over for the construction of a temple by the Supreme Court and had said: “I never thought the verdict would come in my lifetime.” His absence is sure to be felt during the inauguration of the proposed temple at Ayodhya.

The seer was on life support systems since December 20 after his health condition deteriorated following a pneumonia attack. His condition turned very critical after he suffered brain dysfunction Saturday night. His junior, Sri Vishwaprasanna Teertha then decided to bring back the senior pontiff to the matha as he had expressed the desire to spend his last moments at the institution.

The seer was brought to the math at around 7 am on Sunday when he was on a ventilator and at around 9.20 am, he was declared dead by the matha authorities.

After various religious rituals, the mortal remains were taken to the Ajjarkad ground in Udupi where they were kept for public viewing. They were later airlifted to Bengaluru for the last rites as the swamiji had expressed the desire that Sri Poorna Prajna Vidyapeetha in Bengaluru, the institution, which he had started and developed over the decades, should be his final resting place.

Born on April 27, 1931 as Venkatarama, the Pejawar Swamiji became matadhipathi of the matha at the young age of eight and assumed the name Sri Vishwesha Teertha. Known for his revolutionary steps, several of his moves were criticised by his rivals and orthodox Brahmins! He had the record of being the only swamiji to ascend the Paryaya Peetha five times in 1952, 1968, 1984, 2000 and 2016.