Surrender of 4,800 weapons, ammo brings an end to armed conflict in Bodo areas of Western Assam. 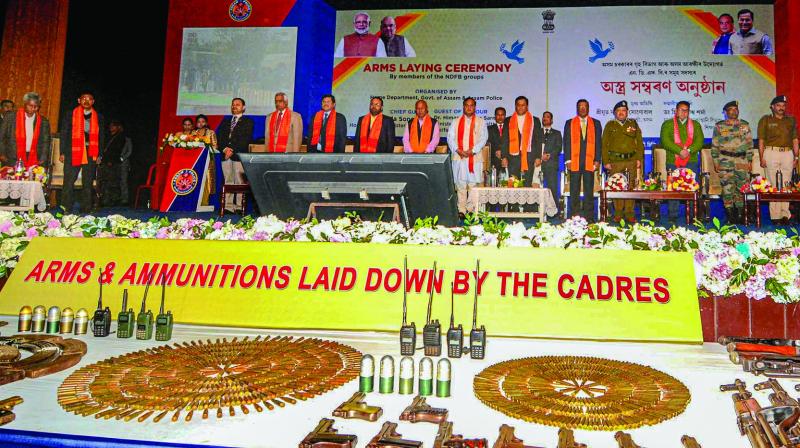 Assam chief minister Sarbananda Sonowal and other dignitaries attend the Arms and Ammunition Laying Down ceremony at GMCH auditorium, in Guwahati, Thursday . After signing the Bodo peace accord, now over 1,500 cadres of National Democratic Front of Bodoland (NDFB) will lay down their arms before the Assam chief minister. (Photo: PTI)

Guwahati: In what has brought an end to a three-decade-old armed conflict in Western Assam, altogether 1,615 cadres of three National Democratic Front of Bodoland  (NDFB) factions on Thursday laid down arms before Assam chief minister Sarbananda Sonowal and his finance minister Himanta Biswa Sarma.

The NDFB factions had signed a tripartite peace accord with the government on Monday (Janu-ary 27) in New Delhi.

Welcoming the cadres — 836 of the NDFB-Progre-ssive, 579 of the NDFB-Ranjan Daimary faction and 200 of the NDFB(S) led by B Saoraigwra — to the mainstream, Mr Sonowal said that he was confident that the move would inspire others, who were yet to give up arms, to come together and work for “Team Assam”.

Over 4,800 weapons, including AK rifles, light-machine guns and sten guns, were laid down by the NDFB members on the occasion.

“We will have to work together for Team Assam to make it a frontrunner state in India and the whole of South East Asia. By giving up the path of violence you have come forward to walk on the road of development,” Mr Sonowal said.

He insisted that “Prime Minister Narendra Modi, Amit Shah and our Assam government, along with you, will ensure peace and development in Bodo areas”.

If the Bodo society progresses, Assam will also progress, the chief minister said.

The chief minister also assured that his government under the leadership of Prime Minister Narendra Modi and home minister Amit Shah will implement schemes and policies that will encourage each and every cadre of the NDFB faction to live a dignified life in future.

The peace accord will felicitate the setting up of a commission under Section 14 of the Sixth Schedule to the Const-itution of India, which will recommend the inclusion or exclusion of tribal population residing in villages adjoining Bodoland Territorial areas.

According to agreement the council will be given additional teeth, which is a step towards increasing its autonomy. Moreover there are provisions for the quick development of tribal areas and rehabilitation of members of the NDFB and its factions in the peace accord.