India   All India  31 Jan 2020  Election Commission cracks down on minister and BJP MP
India, All India

Election Commission cracks down on minister and BJP MP 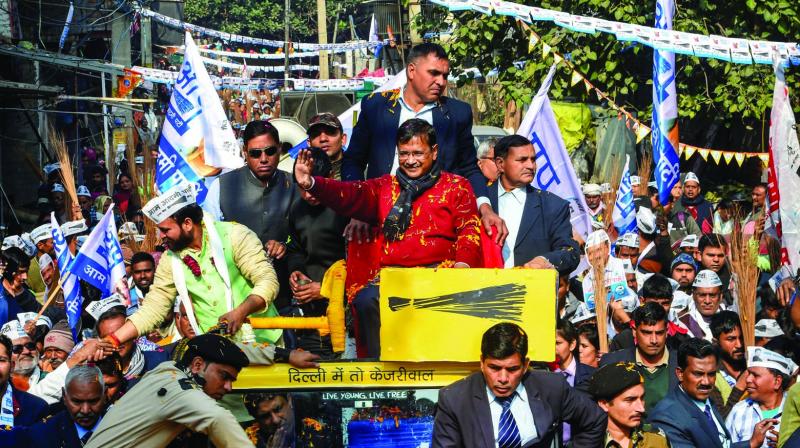 Delhi chief minister Arvind Kejriwal during a roadshow at Model Town in New Delhi on Thursday ahead of the upcoming Assembly elections. (Photo: PTI)

New Delhi: Union minister of state for finance Anurag Thakur and BJP’s West Delhi MP Parvesh Verma were banned by the Election Commission from campaigning in the Delhi Assembly polls for 72 hours and 96 hours respectively for making controversial speeches. The ban came into force from 5 pm on Thursday.

The EC has also decided to convene a special meeting on Friday to discuss all important aspects for the conduct of free and fair elections. It has also granted permission to the Union home ministry to extend by one month the services of Delhi police commissioner Amulya Patnaik, who was due to retire on Friday.

The EC said the BJP leaders had made undesirable and objectionable statements which had the potential to aggravate existing differences. The EC orders barred Mr Thakur and Mr Verma from holding any public meetings, processions, rallies, roadshows and interviews, public utterances in the media (electronic, print, social media) in connection with the ongoing Delhi polls.

Both BJP leaders will also remain off their party’s “star campaigners” list. At a recent public meeting in Rithala, Mr Thakur had shouted “desh ke gaddaron ko”, to which the crowd responded “goli maaro saalo ko (sic)” (shoot down the traitors). Mr Verma had claimed that those who mounted over a month-long sit-in protest at Shaheen Bagh against the controversial citizenship law “will enter your houses, rape your sisters and daughters”.

In his defence to the showcause notice, Mr Thakur told the EC he had only said “desh ke gaddaron ko” (traitors to the country), and it was the crowd which responded. The minister maintained he had no intention to create or promote enmity between people. He sought a personal appearance before the commission, which was rejected.

Reacting to the ban, Mr Verma said he respected the EC decision. “I respect the Election Commission’s decision to ban me from campaigning for the Delhi elections for 96 hours. I assure you I will not campaign for 96 hours. However, afterwards I will resume campaigning with full strength,” he said in a video message posted on his Facebook page.

In another message, however, Mr Verma urged the EC to reconsider the ban on him, saying the poll panel should instead ban Delhi chief minister Arvind Kejriwal and his deputy Manish Sisodia who supported the Shaheen Bagh protests.

On January 31, the commission will hold two meetings to review poll preparedness in Delhi, and discuss all important aspects for the conduct of free and fair polls. One meeting will be with the chief electoral officer and the other with the Delhi chief secretary.