In a chilling video, the teenager is seen walking backwards as he points his gun at protesters. 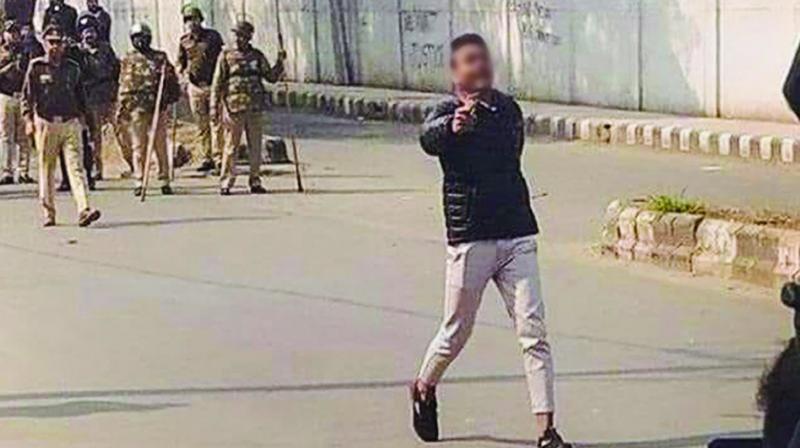 A person (face blurred as his being an adult could not be ascertained) brandishes a gun towards people protesting against the CAA near Jamia Millia Islamia in New Delhi on Thursday. (Photo: PTI)

New Delhi: Thousands of people and police personnel faced off against each other near the Jamia Millia Islamia campus on Thursday after a teenager fired a pistol at a group of anti-CAA protesters, injuring a student, before walking away while waving the firearm over his head, shouting “Yeh lo aazadi”. The injured student, Shahdab Farooq, who was seen bleeding from his left hand, was first taken to Holy Family Hospital and later moved to the AIIMS Trauma Centre. Farooq, a mass communications student, belongs to Kashmir.

The terrifying incident took place as hundreds of students, protesting against the Citizenship Amendment Act, were on their way to Rajghat to pay homage to Mahatma Gandhi, who was assassinated on January 30, 1948. The entire drama, which triggered panic in the area, was captured by television cameras that showed the man in light-coloured trousers and a dark jacket, walking away on an empty road barricaded by the police, turning around and shouting at the protesters in Hindi.

In a chilling video, the teenager is seen walking backwards as he points his gun at protesters. Dozens of policemen in riot gear are seen behind him, but none of them is seen trying to stop the shooter. “Yeh lo azaadi (here’s your freedom)”, he sneered at the protesters. After he fired the shot, one police officer could be seen walking towards him and grabbing him. Saying that he was a juvenile, police officials said the attacker cannot be named. While being taken away, he shouted: “Delhi Police zindabad (Long live Delhi Police)”.

“By the time the police could react, the person already fired. Everything happened in seconds. The investigation is on and the case has been transferred to the crime branch,” special CP (intelligence) Praveer Ranjan told this newspaper. “We have apprehended the person. We are investigating whether he is a juvenile or not.” The police has also seized his Aadhaar card, which shows he was born on April 18, 2002.

Soon after the shooting, the locality was heavily barricaded and traffic diverted from all roads near the area. As night fell, massive protests broke out with agitated students and others gathering near the university, breaking barricades and clashing with police personnel. Some demonstrators, including a woman, could be seen being forcibly taken away. Many sang the national anthem.

As tension spiralled in the area, Union home minister Amit Shah said he had ordered stringent action in the shooting incident and “the culprit will not be spared”. “I have spoken to the Delhi police commissioner on the firing incident (in Jamia area) and instructed them to take strict action. The Central government will not tolerate any such incident, it will be taken seriously and the culprit will not be spared,” Mr Shah tweeted in Hindi.

The incident comes against the backdrop of hate speeches during the campaign for the February 8 Delhi election; Union minister Anurag Thakur has been banned from campaigning for 72 hours after he was caught on camera encouraging the slogan “Desh Ke Gaddaro Ko, Goli Maaro S***** Ko (Shoot the traitors)” at am election  rally.

The teenager is from Uttar Pradesh’s Jewar, near Delhi. He had gone live on Facebook minutes before he drew out his gun. Videos on his Facebook timeline showed him walking around in the crowded road — the venue of the protest — with a red backpack. His previous posts seemed to indicate that he had come prepared for the consequences of his action. “On my last journey, take me draped in saffron and shout slogans of Jai Shri Ram,” one of them in Hindi read. Another more threatening post read: “Shaheen Bagh, Game Over”, referring to a massive protest against the citizenship law taken up by women and children for over a month now.

A Jamia Millia student, who witnessed the terrifying incident, said: “We were standing near the barricades when suddenly this outsider, whom none of us recognised, tried to disturb the peace of the march. He marches forward with a revolver in his hand. We were all trying to stop him and calm him down. The policemen were standing there. We tried to approach them to stop that guy. But they just kept standing there simply. When we tried to take the revolver from his hand, he shot one of our friends.”

Violence had erupted at Jamia Millia Islamia last month during a protest against the citizenship law; the police was accused of using excessive force on students. Earlier this month, masked goons attacked students and teachers at JNU, triggering nationwide outrage and protests.