India   All India  31 Mar 2017  RBI stops exchange of old notes for Indians abroad, many fail to deposit them
India, All India

RBI stops exchange of old notes for Indians abroad, many fail to deposit them

People had to travel long distances due to limitation of designated branches to deposit scrapped currency notes. 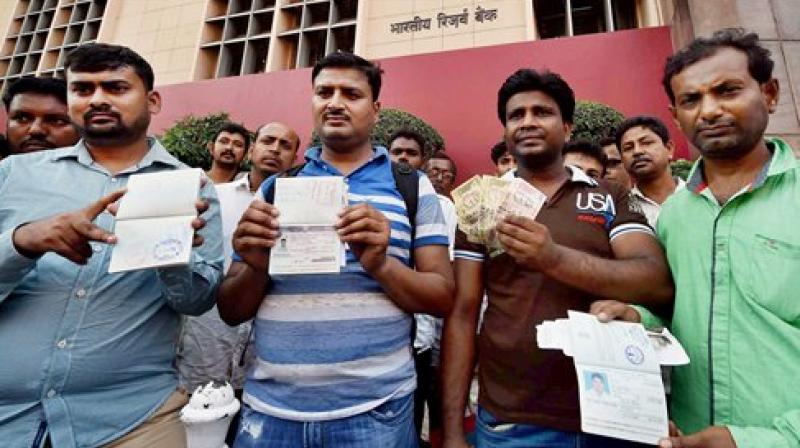 People, who were not able to get their invalid notes exchanged with new currency notes, showing their passports outside RBI in Kolkata on Friday. The deadline for the exchange by residents who were abroad during cash ban ends today. (Photo: PTI)

New Delhi: The limited period window for exchange of junked Rs 500 and Rs 1,000 notes by Indians who were abroad ended on Friday with many failing to do so because of limited counters and lack of procedural awareness.

However, additional time period of three months is available to non-resident Indians (NRIs) with a rider of exchange of Rs 25,000 per individual. The exchange window for NRIs will close on June 30.

Long serpentine queues of people were seen outside five RBI offices in Mumbai, Delhi, Kolkata, Chennai and Nagpur - the designated offices for exchange of scrapped notes - on Friday.

People had to travel long distances due to limitation of designated branches to deposit scrapped currency notes.

In many cases, people had to wait for 6-7 hours and in some cases it took days for exchange due to lack of required documents.

Earlier this week, Minister of State for Finance Arjun Ram Meghwal had informed the Rajya Sabha that ineligible persons queueing up at the Reserve Bank were responsible for long queues.

The minister said RBI had posted detailed instructions on its website clearly showing the eligibility parameters and other necessary documents required to be tendered for exchange of old notes.

"Long queues are formed in Mumbai and Delhi only as a number of persons from the neighbouring states are turning up here. Several staff members have been engaged to attend to the large number of people at the counters," Meghwal had said.

Meghwal stated that while there was no monetary limit for exchange of currency notes for residents who were abroad during the demonetisation period, there was a cap for NRIs as per FEMA regulations.

NRIs coming to India are required to come through Red Channel disclosing to the Customs authorities at the airport the amount of now-defunct notes and secure a certificate to be tendered at the RBI at the time of exchange.

The exchange facility till June is subject to the Foreign Exchange Management (Export and Import of Currency) Regulations, 2015. As per these regulations, bringing back such currency into the country is restricted to Rs 25,000 per person.

The government had declared 500 and 1,000 denomination bank notes as illegal tender from November 9, 2016.

Subsequently, the President approved the promulgation of the Specified Bank Notes (Cessation of Liabilities Ordinance) Ordinance, 2016 on December 30.

The ordinance imposes penal liabilities on the holders of scrapped notes after the specified date. It makes holding, transfer and receiving of the demonetised notes a criminal offence, punishable with a fine of Rs 10,000 or five times the cash held whichever is higher.