The new cases included, eight from Mumbai, five from Pune and two from Nagpur 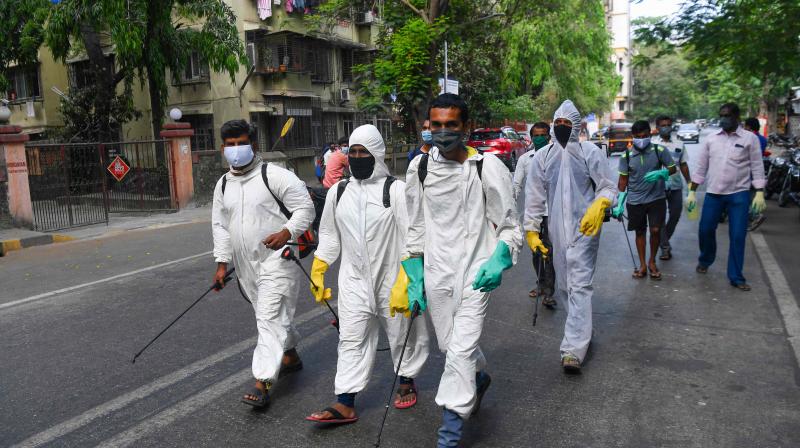 Municipal workers sprays disinfectant as a measure to prevent the spread of Covid19. AFP Photo

Mumbai: The number of Covid-19 cases in Maharashtra climbed to 230 on Tuesday as 17 more patients tested positive, while two patients succumbed to the disease, taking the death toll due to infection in Maharashtra to ten. The new cases included, eight from Mumbai, five from Pune, two from Nagpur, one each from Kolhapur and Nashik. However, 39 patients were discharged on Monday.

An 80-year-old man, down with acute respiratory distress breathes his last on Sunday evening. He was admitted to the Fortis Hospital, Mulund on Friday. He was a known case of hypertension and ischemic heart disease. The senior citizen was tested positive for Covid-19 on Sunday itself, stated a civic health official.

The second death was reported in Pune. The 52-year-old man was suffering from diabetes and high blood pressure and was undergoing treatment at the Deenanath Mangeshkar Hospital. “His samples turned out positive for coronavirus on March 22. He died on Monday at a hospital in Pune,” Pune civic official said said. The man was on ventilator support. He died of multiple organ failure, the official added.

Dr Daksha Shah, deputy director of the BMC health department, said, “There are 47 Covid-19 positive patients recuperating in the city at various civic-run and privately-run hospitals”.

When asked about the measures taken by the civic authorities, she said, “To improve the testing facilities and to speed up the process, the government has approved private labs for Covid-19 testing”.

She added, “As containment measures, areas surrounding the positive cases including one lakh houses and 3,87,000 people are being surveyed to trace contacts of positive cases. The teams are also ensuring the home quarantine measures are being followed. In addition, digital mapping of the containment zone is being undertaken and it will be displayed on MCGM’s website for citizen information and precaution.”