Foreigners among 8K people who attended Tabligh-e-Jamaat at Nizamuddin Markaz in March, many of whom have shown symptoms of COVID-19 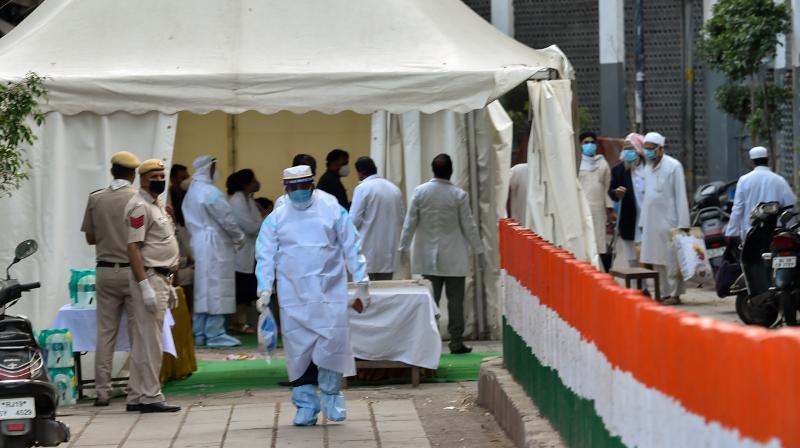 Medics carry out screening as police cordoned off an area in Nizamuddin after some people showed coronavirus symptoms, in New Delhi. PTI photo

New Delhi: India is likely to blacklist about 300 foreigners who came from 16 countries, including Malaysia and Thailand, on tourist visas but attended an Islamic congregation at Nizamuddin here that has become a key source for the spread of coronavirus in the country, officials said on Tuesday.

These foreigners were among around 8,000 people who attended the Tabligh-e-Jamaat at Nizamuddin Markaz facility in March, many of whom have shown symptoms of COVID-19, a Union Home Ministry officlal said.

About 30 of those who attended the Nizamuddin event in mid-March tested positive and at least three have succumbed to the infection in last few days.

"Those who came on tourist visa but attended the Nizamuddin event stands being in our blacklist as they have violated the visa conditions. Tourist visa holders can't attend religious function," a Union Home ministry official said.

If a foreigner is put in the Home ministry's blacklist, he or she can't travel to India in future.

A total of 281 foreigners were found by the police at the Nizamuddin campus in the last two days.

They include 19 people from Nepal, 20 people from Malaysia, one from Afghanistan, 33 from Myanmar, one from Algeria, one from Djibouti, 28 from Kyrgystan, 72 from Indonesia, 7 from Thailand, 34 from Sri Lanka, 19 from Bangladesh, three from England, one from Singapore, four from Fiji, one from France and one from Kuwait.

Most of these foreigners came on a tourist visa, an official said.