India   All India  31 Mar 2020  Nizamuddin attendees from Maharashtra to be traced
India, All India

Nizamuddin attendees from Maharashtra to be traced 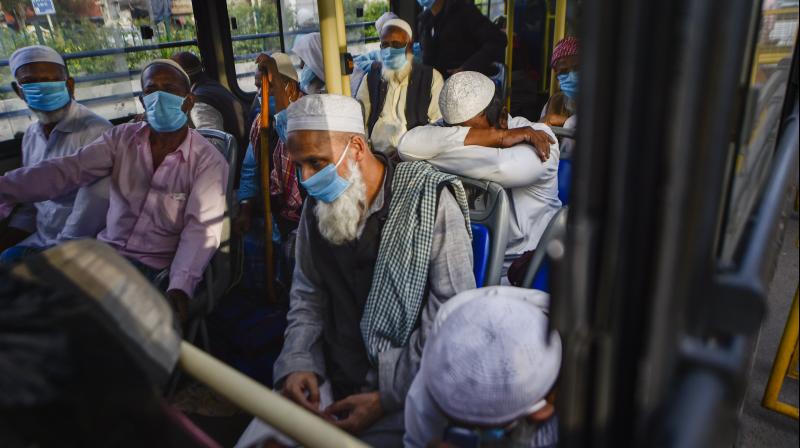 People wearing masks leave for hospital in a bus from Nizamuddin area, after several people showed symptoms of coronavirus following taking part in a religious gathering a few days ago, during the nationwide lockdown, in New Delhi. PTI photo

Mumbai: In view of several people showing coronavirus symptoms after taking part in the Tabligh-e-Jamaat at Nizamuddin West in Delhi, Maharashtra Health Minister Rajesh Tope on Tuesday instructed the authorities to trace the state citizens who visited the religious congregation in the national capital.

Twenty-four people who took part in the congregation earlier this month have tested positive for the coronavirus, Delhi Health Minister Satyendar Jain said on Tuesday, adding that 1,033 people have been shifted to various places.

When Tope was asked about it, he told PTI, "If anyone who has attended the congregation shows symptoms of coronavirus infection, we will quarantine the person and collect a swab sample for testing."

All precautionary measures will be taken to avoid further spread of the disease, he added.

"After learning that some 100 people from Maharashtra attended the congregation, I have asked my officials to find out how many people actually attended it and their current location," he said.

"Once we zero-in on them, necessary steps will be taken with the support of the state health ministry. The priority now is to find out the exact number of people from Maharashtra who attended the congregation and their current status," he said.

A senior state health official said it is a very serious matter because out of 25 COVID-19 patients found in New Delhi on Monday, 18 were at the seminary in Nizamuddin.

"This means, the infection has spread significantly and we need to trace people from Maharashtra who attended it at the earliest," he added.