India   All India  31 May 2018  Rajinikanth blames Sterlite clashes on anti-socials
India, All India

The superstar said it was true that the police intelligence failed but that did not mean the infiltrators were not to be blamed. 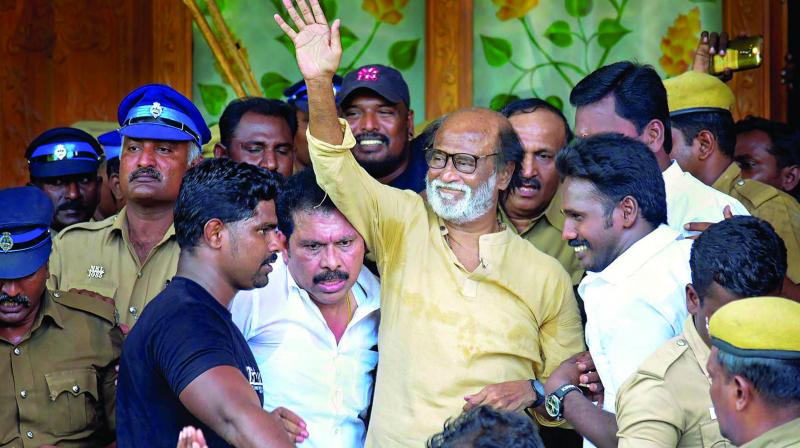 Actor-turned-politician Rajinikanth waves at supporters as he comes out of a government hospital after visiting those who got injured Tuticorin police firing, in Tuticorin. (Photo: PTI)

Thoothukudi/Chennai: Superstar Rajinikanth on Wednesday blamed anti-socials for the violence during the anti-Sterlite rally on May 22 that resulted in 13 deaths in police firing and warned that Tamil Nadu would end up as a graveyard if too many agitations disrupt order in the state. He wanted a Jayalalithaa-style iron fist policy to crush the anti-socials “as otherwise this state would face serious danger”.

Looking visibly annoyed and angry as a couple of reporters heckled him at his media interaction at Chennai airport, asking him to substantiate his allegation about the anti-socials’ infiltration, Rajinikanth said it was “absolutely true that “problem started only after the police came under attack from such anti-social elements”.

Attacks on policemen should not be tolerated at any time as then there would be no protection for the seven million people in the state, he asserted, before walking away from what was becoming a verbal duel between him and a section of the media.

The reporters were repeatedly quizzing him if he had any evidence of anti-socials infiltrating and also mentioned that the opposition leaders had reacted angrily to his ‘infiltration’ charge made earlier at his Thoothukudi media meet, saying that the anti-Sterlite protesters felt humiliated that he was branding them as anti-socials. Showing aggressive body language, Rajinikanth said the same kind of anti-socials had infiltrated the Jallikattu protest at Marina to make it violent during the last stage and the pattern was repeated during the IPL demonstration in Chennai.

Now too, the anti-Sterlite protest turned bloody because of the ‘infiltration’ on May 22 while it had been peaceful for 99 days of continuous agitation by the people, he argued, adding, “The people, who participated in the protests, including the fishermen, are innocent”.

Asked if the police were not responsible for the bloodshed, the superstar said it was true that the police intelligence failed but that did not mean the infiltrators were not to be blamed. The violent elements infiltrating genuine anti-Sterlite protesters attacked the Collector’s office, and torched vehicles vehicles parked in the Sterlite quarters and beat up the police brutally.

Earlier, speaking to reporters at Thoothukudi after meeting those injured in the police firing, Rajinikanth dismissed as ‘mere politics’ the opposition demand for the resignation of Chief Minister K Palaniswami. “If you demand resignation for everything, what (is the purpose)... I don’t want to talk about that,” he said.

On the other hand, he said, the government should take firm steps against the anti-socials. “On that front I laud Jayalalithaa as she kept such elements under check with an iron fist. They should follow her policy and keep them under check, as otherwise it will result in great danger for Tamil Nadu,” he said.

To a question, he said he had “no confidence” in the state government appointed one-man inquiry commission to probe the violence, under retired Madras High Court judge Aruna Jegadeesan.

The actor said constant agitations may not yield solutions whereas the courts could be approached to get any grievance redressed. Agitations often happen in the state, “sometimes for genuine reasons but we must be careful against being incited and misled”.

He also warned that too many protests could dissuade trade and investors from coming to Tamil Nadu, which would hit the state economy and hurt the employment opportunities for the youth when the farm sector has already been badly affected by water scarcity.

Earlier in the day, when reporters sought his comment on Prime Minister Narendra Modi not reacting to the Thoothukudi violence so far, he shot back: “The media is so powerful. Ask him, ok.”

The actor gave away Rs 10,000 relief to each of the 48 injured persons. He had earlier announced a relief of Rs two lakh each to the families of the 13 deceased.