Two things happened even as Saleem and the rest of the Kalam kin, along with DRDO’s Col. 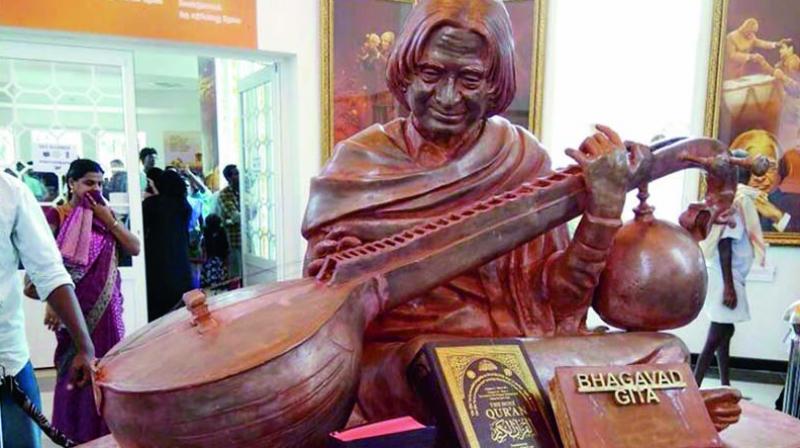 Copies of the Bible and Quran placed along side a wooden piece engraved with the words ‘Bhagavad Gita’ near the wooden statue of former President A.P.J. Abdul Kalam at his memorial. (Photo: PTI)

Rameswaram: A wood-engraved Bhagavad Gita kept close to the statue of late President A.P.J. Abdul Kalam in his memorial here has provided fodder for “alert” politicos demanding to know why there weren’t holy books of other religions placed there as well. MDMK chief Vaiko saw a Hindutva agenda in Gita getting prime place at the Kalam statue. It was a BJP conspiracy to besmirch Kalam’s fame, concluded state Congress president S. Thirunavukarasu.

Distressed by the unseemly controversy, Kalam’s grandnephew Sheik Saleem sought the help of the chief of the Kalam memorial project, Col. Bishwajeet Choubey of DRDO, which built the memorial and is in-charge of its maintenance. Col. Choubey, who had enjoyed close rapport with Dr Kalam for several years, promptly pointed out to Saleem that the Quran and Bible used by the great man were also there displayed in glass boxes close by. Upon this, Saleem sought to douse the controversy by showing to the media persons the two holy books before putting them back in their glass boxes. 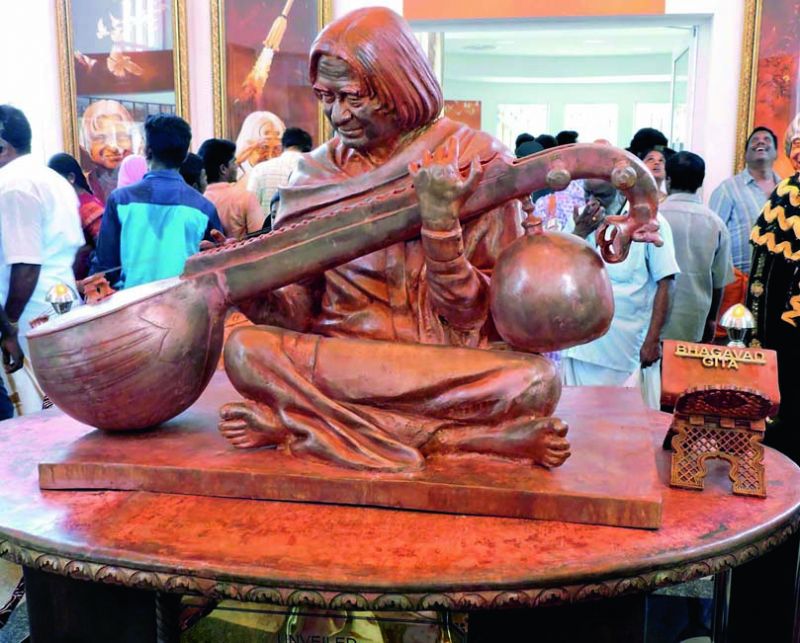 Two things happened even as Saleem and the rest of the Kalam kin, along with DRDO’s Col. Choubey, were trying their best to halt the unseemly controversy before it flared further. First, some Hindutva group lodged a complaint in nearby Thangachimadam police station saying that “some Muslim called Saleem” had smuggled in a Quran and a Bible to place them next to the Gita. Next, some others raised an alarm that the two holy books went missing afterwards, perhaps taken away by Hindutva people.

Col. Choubey had to explain on phone to the Ramanathapuram SP that Quran and Bible were already in the memorial and Saleem had only taken them out of their glass boxes to show them to the media. He had subsequently put them back. The SP was satisfied.

“This is an unnecessary controversy and this is very unfortunate... He loved all people. The world knows that”, said Saleem, sounding very bitter.

“The DRDO officials and workers worked round-the-clock to bring up this wonderful monument for Kalam. Should we be putting them under stress now for such a fissiparous reason?” he wondered.

‘Green Man’ Abdul Ghani, closely associated with the Kalam Foundation, told DC that the statue was kept as a ‘surprise’ by the DRDO until Prime Minister Modi unveiled it on July 27. “It was kept covered by a cloth and that’s why the media, which knew the other exhibits in the memorial, did not know about the statue. And the sculptor could have included the Gita as he had drawn inspiration for his work from a picture of Kalam playing on his Veena with a Gita nearby”, said Ghani, adding, “I have always found on Kalam’s table the Gita, Quran, Bible and Thirukkural”.

He said Kalam’s favourite Thirukkural too was very much in the Museum along with the other things frequently used by the great man. “Let the people see all these things, besides the inspiring pictures and sculptures that include the missiles he made. That would be the fitting tribute to Kalam, not these kind of controversies”, he said.