India   All India  31 Jul 2017  Partition is not over: Pakistani Hindus find little refuge in India
India, All India

Partition is not over: Pakistani Hindus find little refuge in India

Most of the migrants to India come from Pakistan's Sindh province, taking a 4-hour train journey through the Thar desert to Jodhpur. 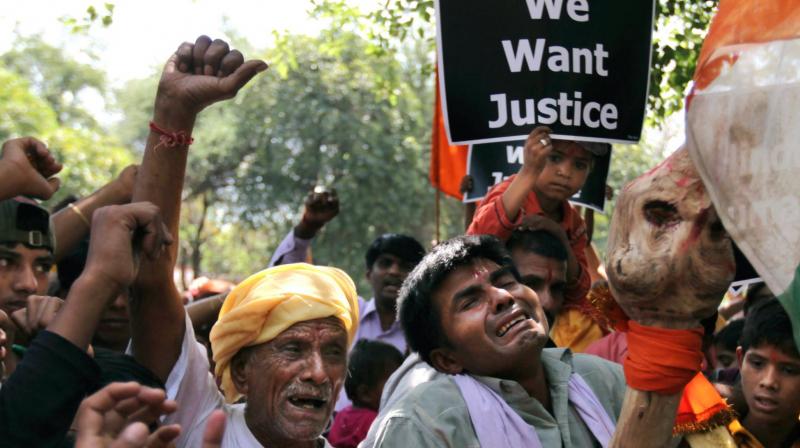 Many have no choice but to toil illegally in the stone quarries near where they live because their movements are strictly controlled by the authorities, suspicious of anyone from across the border. (Photo: Representational/AP)

Jodhpur: For decades, Jogdas dreamed of moving to India to escape the persecution he suffered as a Hindu in Muslim Pakistan. But the reality of life over the border is a far cry from those dreams.

Seventy years after partition unleashed the largest mass migration in human history, Hindus are still moving from Pakistan to India, where tens of thousands languish in makeshift camps near the border with no legal right to work.

Many have no choice but to toil illegally in the stone quarries near where they live because their movements are strictly controlled by the authorities, suspicious of anyone from across the border.

It is not the welcome most of them expected in Hindu-majority India. "No job, no house, no money, no food. There, we were working in the fields, we were farmers. But here people like us are forced to break rocks to earn a living," said 81-year-old Jogdas, who goes by just one name.

"For us the partition is still not over. Hindus are still trying to come back to their country. And when they come here, they have nothing," he said from the camp on the outskirts of the western city of Jodhpur where he lives.

Amid the bloody chaos, Hindus and Sikhs fled the newly formed Pakistan, as Muslims moved in the opposite direction.

Despite the exodus, Hindus remain one of Pakistan's largest religious minorities. Estimates vary, but they are believed to account for around 1.6 percent of the population of roughly 200 million.

Many say they face discrimination and even risk abduction, rape and forced marriage. "Soon after partition, the harassment started," said Jogdas, whose family had only moved to what is now Pakistan a few months before partition to escape a devastating drought.

"There was not even a single day when we could live in peace. I wanted to come back to live with my Hindu brothers."

Most of the migrants to India come from Pakistan's Sindh province, taking a four-hour train journey through the Thar desert to Jodhpur in the arid western state of Rajasthan.

That they share the culture, food and language of Rajasthan should make it easy for them to assimilate in their adopted homeland.

In reality, they live in isolated camps, far from local communities and are treated with suspicion by authorities.

Prime Minister Narendra Modi's Hindu nationalist government has said it wants to make it easier for persecuted adherents of the faith to find refuge in India.

Last year it changed the rules to allow immigrants to apply for citizenship in the state where they live, rather than having to go through the central government.

Hindus from Pakistan qualify for a fast track to citizenship after seven years in the country.

But bureaucratic delays have meant the process of getting it can take longer to complete.

Khanaramji, 64, became an Indian citizen in 2005 after fleeing Pakistan in 1997. He said many others had given up and returned to Pakistan, disillusioned by life in India.

"There is no assistance from the government. We are just like cattle with no owners. We are just surviving on our own," he said.

Worse even than the poverty is the suspicion from authorities. "Those who do not have citizenship are harassed by (intelligence) agencies. They are always treated like suspects and agents of Pakistan," said Khanaramji, who goes by only one name.

"They spend most of what they earn on going to police stations and agency offices." Hindu Singh Sodha, who runs a charity in Jodhpur for Pakistani Hindus seeking to settle in India, said they had high hopes of Modi when he came to office in 2014, but had been disappointed.

The migrants still come under increased scrutiny whenever tensions flare between India and Pakistan -- a frequent occurrence under the Modi government.

"Their life becomes hell," he said. "Because everything is affected. Their shelter, healthcare, access to education, their livelihood." But some feel, even that is worth tolerating.

Horoji fled to India with his two adult sons two years ago after receiving death threats from the family's Muslim neighbours in Pakistan.

"To save our lives, we had to run to India," said 65-year-old Horoji, whose grandparents were originally from present-day India but found themselves on the wrong side of the border at partition.

"My grandfather had gone to the other side for work. But he had told us to move to India when the right time comes as he had sensed times would not be safe for Hindus in future."