India   All India  31 Jul 2019  IMD warns about 'extremely heavy rainfall' in 5 districts of Maharashtra on August 4
India, All India

Maharashtra generally receives seasonal rainfall between June to September and at times till mid-October. 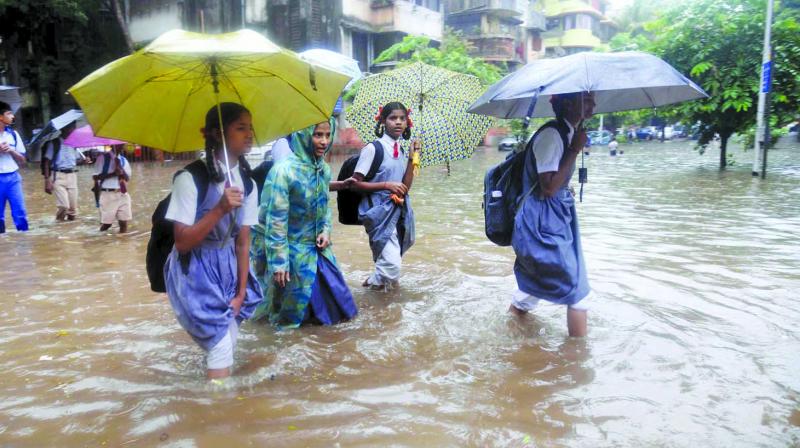 Meanwhile, despite the increased activity of the south west monsoon over Maharashtra, 11 districts in the state are still deficient of their normal rainfall at the end of July, according to IMD. (Photo: File)

Mumbai: The Met department has issued a warning of "extremely heavy rains" at isolated places in Palghar, Raigad, Pune, Kolhapur and Satara districts for 4 August.

The department on Wednesday predicted "heavy to very heavy" rainfall at few places during the entire week for Konkan, and parts of south Madhya Maharashtra. Marathwada and Vidarbha region would receive light to moderate rains till Sunday, the forecast stated.

On Wednesday, Mumbai, Navi Mumbai and Thane have received intermittent showers since morning.

Meanwhile, despite the increased activity of the south west monsoon over Maharashtra, 11 districts in the state are still deficient of their normal rainfall at the end of July, according to IMD.

Maharashtra generally receives seasonal rainfall between June to September and at times till mid-October. The state has received good showers in the last one week but the deficiency in the precipitation created due to late arrival of the south-west monsoon has not yet been met, an IMD official said.

When asked about the performance of the monsoon in Maharashtra in the first two months of the season, the IMD official said, "the districts such as Solapur, Osmanabad, Beed, Latur, Nanded, Parbhani, Hingoli, Washim, Yeotmal, Bhandara and Gondia are still deficient compared to their actual average rainfall."

"Pune is the only district where largely excess rainfall has been received  in the state so far, as it received 98 percent excess showers as against its normal precipitation till July end," the official said. The districts that have received excess rainfall are Nashik, Ahmednagar, Satara, Kolhapur, Ratnagiri, Raigad, Thane, Palghar, Mumbai city and Mumbai suburban, where more than 20 percent of the actual rainfall was received.

The rest of the districts, which are mostly in north Maharashtra, and northern districts in Marathwada and four districts of Vidarbha (Wardha, Nagpur, Chandrapur and Gadchiroli) have received normal rainfall, he said.