India   All India  31 Jul 2019  We need to cut costs for people with Ayushman Bharat scheme
India, All India

We need to cut costs for people with Ayushman Bharat scheme

Consider three different situations that are not just plausible, but in fact, highly probable under PM-JAY. 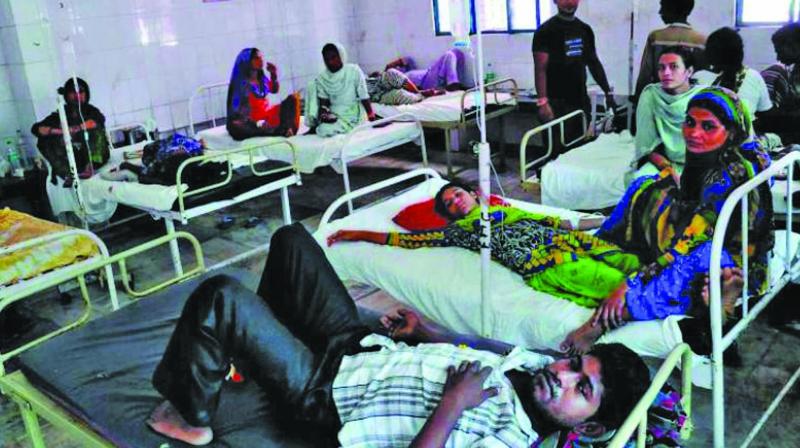 The Ayushman Bharat scheme can be a boon to poorer Indians.

The Pradhan Mantri Jan Arogya Yojana (PM-JAY) entitles free hospital care to India’s nearly 100 million poor and marginalised families. PM-JAY is one of the two components of Ayushman Bharat (the other component being the establishment of health and wellness centres). PM-JAY is also the fastest moving component, having benefited nearly 3.4 million individuals in a short span of 10 months since its launch. Although the Central allocation to PM-JAY is only `6,400 crores — about 10 per cent of the Central health budget — it is all set to grow by leaps and bounds with an expected surge in claims over the next few years. Hence, the need to think of ways and means to reduce the cost of PM-JAY. Here are some thoughts.

Consider three different situations that are not just plausible, but in fact, highly probable under PM-JAY.

Situation 1: A bidi smoker hailing from a poor household gets admitted into a hospital for treatment of a lung infection. He stays there for a few days and is discharged after receiving treatment and a warning to quit smoking, else…

Situation 2: A man riding a motorcycle, with his wife sitting behind, loses balance when his bike hits a pothole that he couldn’t notice in the night due to poor street-lighting. While the man gets away lightly with a few minor bruises, his wife suffers multiple bone fractures for which she is admitted into a nearby hospital. She is discharged after a few days with plasters on her leg and arm.

Situation 3: A carpenter in his late 50s is admitted into a hospital where he gets a cataract surgery done. He is discharged within 24 hours.

All three persons would be entitled to receive free hospital treatment under PM-JAY. The first situation could have probably been avoided if the person wasn’t a smoker. The second situation too could have been avoided if other government agencies were doing their work well. The third situation is probably the result of aging, which is a natural phenomenon that can be slowed, but not stopped or reversed, through healthy behaviour.

PM-JAY has to bear the hospital expenses of people with unhealthy behaviours, for injuries or sickness on account of the negligence of other government agencies and for treating conditions associated with the normal aging process. One may ask, how probable are these situations? Let’s look at some numbers.

India has 72 million regular bidi smokers over the age of 15 (as per a study by the Centre for Public Policy Research in 2018). Bidi smoking prevalence is higher among the poor. Bidi smoking is associated with many types of cancers: of the mouth, pharynx, larynx, oesophagus and lungs — it also increases the risk of chronic bronchitis, tuberculosis and respiratory diseases. A majority of bidi smokers are covered under PM-JAY. If one adds to it the number of people who consume smokeless tobacco (about 28.6 per cent of the total population consumes tobacco in any form), the number of poor people suffering from tobacco related-illnesses would go up sharply. This is not all. Add to it the prevalence of alcohol (eg. toddy) consumption among the poor, and one would get a high percentage of people covered under PM-JAY having unhealthy behaviours. Giving `5 lakh worth of hospital entitlement to every poor household every year, without any accompanying measures, is probably going for an overkill. What could the National Health Authority (NHA), the nodal agency for PM-JAY, do?

Ongoing nationwide campaigns such as promotion of yoga, airing of anti-tobacco messages, pictorial warnings in public places and so forth will undoubtedly have some positive influence. But something more needs to be done that is specifically targeted at the population covered under PM-JAY.

This is where insights from the behavioural sciences could be harnessed by the NHA for the benefit of the program. Behavioural science is an emerging field of the inquiry of human behaviour and decision-making from a multidisciplinary perspective to examine the role of emotions, psychology, cognition, social networks and norms and so forth in influencing individual behaviour. The NHA needs to constitute a small team to continuously experiment with innovative methods to influencing the behaviours of the population covered under its program. But this is not all.

PAYING FOR THE NEGLIGENCE OF OTHER AGENCIES?

A significant amount of health risks being carried by PM-JAY beneficiaries has its origin in various services that fall under the purview of other government agencies — ministries/departments/municipalities/regulatory bodies. Any negligence on the part of these agencies would contribute to the health risks of the population, including the poor. For example, numerous studies have highlighted the living conditions of the poor in urban slums and how deficiencies in basic public services such as water, sanitation and solid waste management contribute to illnesses and deaths of the poor. During severe illnesses, these people would avail their entitlement under PM-JAY.

Similarly, look at the road accidents involving the poor. As per the Government of India’s data, nearly 150,000 people were killed and nearly 470,000 were injured in road traffic crashes in India in 2017. This number is probably an underestimate as many cases do not get reported and hence do not find their way into official records. The global status report on road safety 2013 had estimated that nearly half of all deaths on the country’s roads are among vulnerable road users — motorcyclists, pedestrians and cyclists. Probably, most of these vulnerable road users belong to the low-income group and are covered under PM-JAY. Most of these accident-related injuries are avoidable through better design and implementation of transport infrastructure and the enforcement of traffic rules. Similar is true of the works of other public agencies providing basic services.

Should PM-JAY bear the costs arising out of negligence of other public agencies? Ideally, these agencies must be made to reimburse the program of the hospitalisation costs of the poor on account of their negligence.

Hereto, the NHA needs to constitute a small group to link hospitalised cases to its immediate determinants of health and estimate the program liability on account of the negligence of other public agencies.

The bill of PM-JAY is all set to go up on account of the program being in a “surge” phase as well as the anticipated revision of rates (the committees have already been set up to review the cost structure of medical packages covered under the program). It’s time that the NHA starts thinking innovatively on how to cut down on the program costs.