India   All India  31 Jul 2020  COVID is our chance to reset the world, says Nobel laureate Yunus, the guru of micro loans
India, All India

COVID is our chance to reset the world, says Nobel laureate Yunus, the guru of micro loans

He was speaking to Congress leader Rahul Gandhi, as part of the latter's dialogue with leading experts. 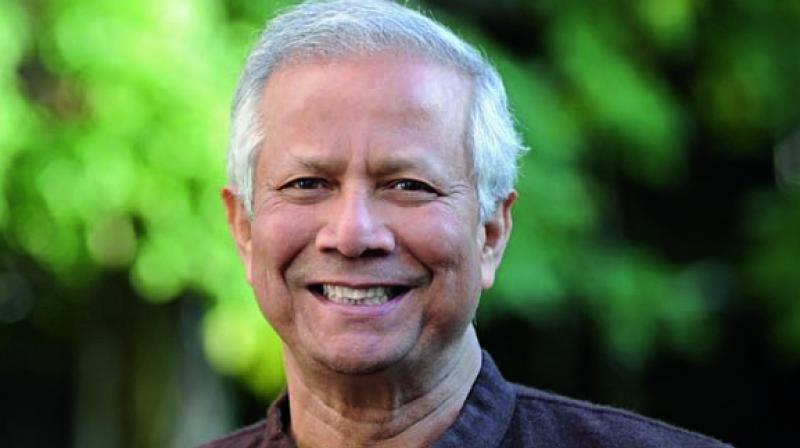 The coronavirus pandemic has given the world a chance to reflect and take "outrageously" bold decisions to create a new order where there is no global warming, no wealth concentration and no unemployment, Nobel Peace Prize recipient and Bangladeshi economist Muhammad Yunus has said.

He was speaking to Congress leader Rahul Gandhi, as part of the latter's dialogue with leading experts. The Congress party on Friday released the video of the pre-recorded interview with the Bangladeshi economist.

"COVID-19 pandemic has given us a chance to reflect on how big, bold decisions can be taken. It has given us a window of thinking and we have a choice, whether we go to that terrible world which is going to destroy itself anyway or we go someplace else and build a new world where there will be no global warming, no wealth concentration, no unemployment," the pioneer of micro credit financing said.

Yunus also called for making a new beginning towards a system that will create space for the informal and rural economy and all sections of society.

Moreover, rural India has been largely insulated from the COVID-19 pandemic but the situation could turn for the worst as migrants have reached their villages during the lockdown. "Workers have chosen to return to their native place, thus starting paths of migration from urban hotspots to more isolated communities, potentially allowing for greater spread into vulnerable communities," a SEWA report has said.

Yunus criticised the western economic model, saying it is based on treating the urban economy as the hub and the rural economy as the supplier of labour. His criticism coincides with India facing one of the biggest internal migration of the labour force from urban centres to rural areas.

His criticism is not off the mark. As per the 2016-17 PLFS, 121 million workers in urban areas belong to the informal sector, with a large number of them coming from rural hinterland of India. As per reports, at least 93 million of them are involved in manufacturing; trade, hotel and restaurant; construction; transport, storage and communications; and finance, business and real estate. All these sectors, especially manufacturing, hotel and real estate have been hit by the lockdown-induced migration.

He stressed on building an autonomous economy, citing how he built Grameen Bank on trust. Millions of dollars could be loaned to the poor just on trust and they would return the amount with interest, he said.

"How did we do that in Grameen Bank? People were shocked. I said we believe in their capacity. They believe in us. There is no collateral. Grameen Bank is the only bank in the world which is lawyer free. A bank built on trust where millions of dollars are given and come back with interest," said Yunus, adding, that when micro credit was given to women they showed how much entrepreneurial capacity they had.

Yunus also emphasised the need to value human culture, saying that everything the world has done is to fuel greed which has destroyed everything.

"This is the chance I said, corona has given us a chance to reflect...In normal situations you will not pay attention to all these things. We are so busy making money," noted the economist.