In active cases, 1.61 per cent patients need ICU care and 2.32 per cent are on oxygen support. 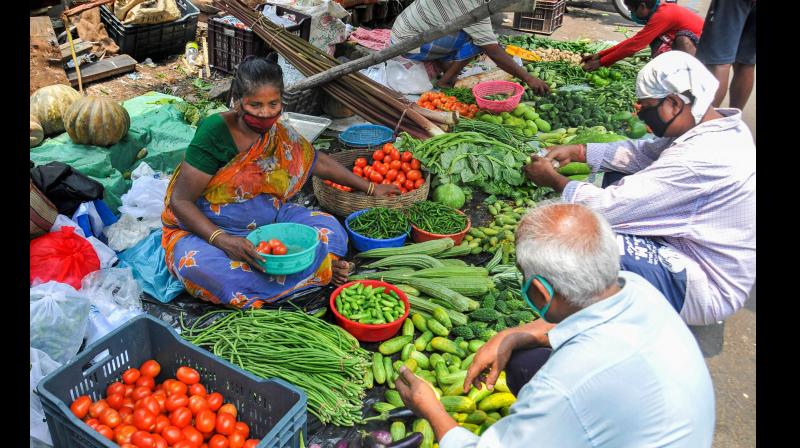 Buying veggies in the times of coronavirus. (PTI)

New Delhi: India's COVID-19 case fatality rate is progressively declining and now stands at 2.18 per cent, one of the lowest globally, while just 0.28 per cent of the total active patients are on ventilator, Union Health Minister Harsh Vardhan said on Friday.

Chairing the 19th meeting of the Group of Ministers (GoM) on COVID-19 through video-conference on Friday, Vardhan said India has achieved the milestone of more than 10 lakh recoveries, a recovery rate to 64.54 per cent.

"This shows that the active cases under medical supervision are only 33.27 pc or approximately 1/3rd of total positive cases, he was quoted as saying in a health ministry statement.

India's Case Fatality Rate is also progressively reducing and currently stands at 2.18 per cent, one of the lowest globally," he said.

Speaking on the severity of the disease, Vardhan said, "Out of the total active cases, only 0.28 per cent patients are on ventilators, 1.61 pc patients needed ICU support and 2.32 per cent are on oxygen support.

The GoM was briefed on the current status of COVID-19 in India and was apprised about the ramping up of the domestic production capacities of various sectors for manufacturing PPEs, masks, ventilators and drugs such as hydroxychloroquine, the statement said.

In terms of healthcare logistics, cumulatively 268.25 lakh N-95 masks, 120.40 lakh PPEs and 1,083.77 lakh HCQ tablets have been distributed to states/UTs and Central institutions, it said.

During the meeting, National Centre for Disease Control Director Dr Sujeet K Singh presented a comparison on daily cases, deaths and growth rate in 10 countries with the highest caseload, it stated.

The GoM was also apprised on the distribution of confirmed cases and active cases in the containment zones across the country.

He also told the meeting about the number of tests and positivity rate across states and UTs and active cases and deaths in top 20 districts and containment zones across districts.

He highlighted that efforts are being made to reduce mortality in high caseload regions and cities like Pune, Thane, Bengaluru, Hyderabad etc that are showing recent upsurge.

These have to be aided by increase in oxygen beds and ventilators and assessing the true burden through planned sero-surveys, the statement said.

In moderate case load districts/cities, the efforts would focus on preventing spill-over from the high burden areas, limiting local spread, early identification of cases, strengthening contact tracing with the use of technology and community involvement, the ministry said.

As for the low burden districts, the efforts aim at preventing infection among the population from other areas, strengthening Influenza Like Illness (ILI) and Severe Acute Respiratory Illness (SARI) surveillance and targeted testing, rigorous contact tracing with targets to be set by the local administration and prior identification of high risk population, it said.

Director General of Foreign Trade Amit Yadav briefed the GoM on different items that were put under export restriction and prohibition during the COVID-19 pandemic and their present status.

The GoM deliberated upon the protocols being followed at the airports and the systemic improvements in triaging of incoming passengers.