Army to undergo major reforms, 57,000 officers to be redeployed

Arun Jaitley said perhaps for the first time after Independence, such a big and far-reaching reform process is being initiated in the Army. 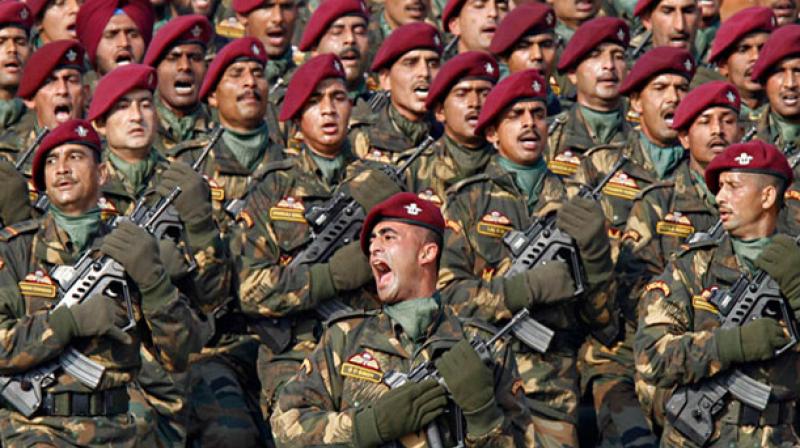 The Army has a total strength of around 12 lakh personnel and is one of leading ground force globally. (Photo: PTI/Representational)

New Delhi: Major reforms will be carried out in the Indian Army to enhance its combat capability which will include redeployment of nearly 57,000 officers and other ranks as well as ensuring better utilisation of resources, the government announced on Wednesday.

Defence Minister Arun Jaitley said perhaps for the first time after Independence, such a big and "far-reaching" reform process is being initiated in the Army.

Replying to a question on whether the exercise was undertaken keeping in view the Doklam episode, Jaitley said,

"This is not specific to any incident. It had been going on much prior to Doklam," he said.

The reform initiatives were prescribed by a committee headed by Lt Gen DB Shekatkar (retd) which had a mandate to recommend measures for enhancing of combat capability and rebalancing defence expenditure of the armed forces to increase "teeth to tail ratio".

The 'tooth-to-tail' ratio refers to the amount of supply and support personnel (termed as tail) for each combat soldier (tooth).

The panel had suggested 99 recommendations for structural changes in the Army and out of which the defence ministry has accepted 65 after consultations with all the stakeholders, Jaitley said.

He said operationalisation of the reforms begins "now" while the defence ministry stated that the process will be completed by December 31, 2019.

The Army has a total strength of around 12 lakh personnel and is one of leading ground force globally.

"The net effect of this is, as to various, different functions in the Army, as per the changed environment of technology, economy, combat capability of the Army, how it is
to be best utilised," Jaitley told reporters.

In a statement, the ministry said civilians will be redeployed in different wings of the armed forces for improving efficiency.

Army sources said around 31,000 civilian staff will be redeployed including in new formations, adding reform will be carried out in the Army's education corp as well.

Jaitley said the Union Cabinet was today apprised of the defence ministry's decision to carry out the reform process in the Army.

The Shekatkar committee was appointed in May last year and it had submitted its report in December.

"In a first ever exercise after Independence, the Ministry of Defence in consultation with the Indian Army has decided to reform the Indian Army in a planned manner. These
decisions were approved by the Defence Minister," the ministry said in a statement.

In the first phase, it said the reforms will involve redeployment and restructuring of approximately 57,000 posts of officers, junior commissioned officers and other ranks and civilians.

It said optimisation of signals establishments, closure of military farms and army postal establishments in peace locations as well as restructuring of repair echelons in the army including base workshops will also be part of the extensive exercise.

The reform will also be carried out to ensure better utilisation of supply and transport facilities and animal transport units. There will be enhancement in standards for recruitment of clerical staff and drivers in the Army as also steps will be taken to improve the efficiency of the National Cadet Corps.

"Implementation has begun with the decision of the Cabinet Committee on Security to close 39 military farms in a time bound manner," the ministry said.

The Army's commanders in April had deliberated extensively on enhancing the force's overall strike capability.

"Restructuring by the Indian Army is aimed at enhancing combat capability in a manner that the officers/JCOs/ORs will be used for improving operational preparedness and civilians will be redeployed in different wings of the armed forces for improving efficiency," said the defence ministry.