India   All India  31 Aug 2018  3-yr-old shot in head during TMC-BJP clash in Bengal over local body elections
India, All India 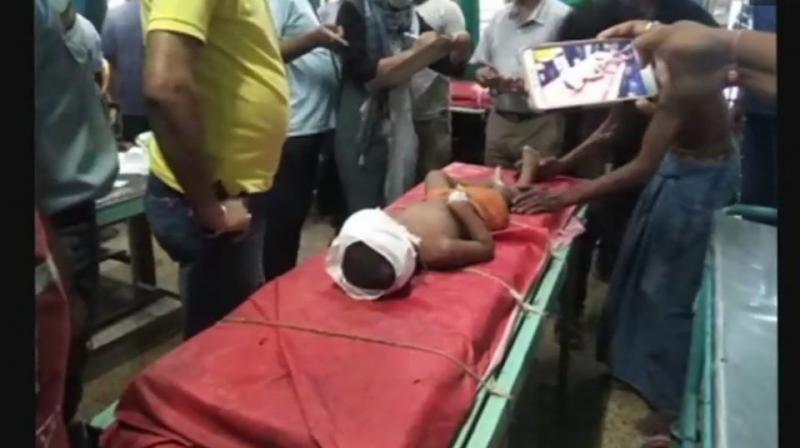 The child is admitted to Malda Medical College and Hospital where he is undergoing treatment. (Photo: Twitter | ANI)

Kolkata: A three-year-old boy is battling for life after being shot in the head in West Bengal’s Malda district on Thursday, becoming the latest victim of political violence in the state.

The child is admitted to Malda Medical College and Hospital where he is undergoing treatment.

The boy was shot in head in what appears to be a fight between the Trinamool and BJP workers, over control of a local panchayat board in Malda.

According to reports, Putul Mondal, the attacked boy’s mother, had contested and won the panchayat polls on a BJP ticket but when time came to vote for the formation of the panchayat board, she reportedly switched sides and moved to Trinamool.

The Trinamool Congress alleged that the BJP attacked Putul Mondal’s house on Thursday to seek revenge.

According to police reports, a group of armed men barged into her house in the afternoon on Thursday and began quarrelling with her. The quarrel turned violent and the men opened fire. Her son, who was in the room, was shot in the head.

"They were angry with her for joining Trinamool," said Dulal Sarkar, the Malda district Trinamool leader.

The BJP has denied any party connections. "It's a case of infighting within the Trinamool. She changed loyalties for money. When the money did not materialise, they fought and shot the boy," said BJP leader Abhijit Mishra.

The party claimed the Trinamool had "bribed" Putul Mondal to switch sides during the panchayat board formation.

"BJP-backed toughs shot the child and are now laying the blame at Trinamool's door. Our chief minister (Mamata Banerjee) has spoken against the culture of violence all along," countered West Bengal panchayat minister Subrata Mukherjee.

West Bengal BJP chief Dilip Ghosh said, "If any BJP worker is involved in the incident, we will hand him over to the police but the state government has to stop the violence."

In this week alone as many as 10 people have died in political violence said the police.

Of the 18 seats in the local panchayat board, the BJP has won ten and Trinamool six. A Congress and an Independent winner recently joined the Trinamool.