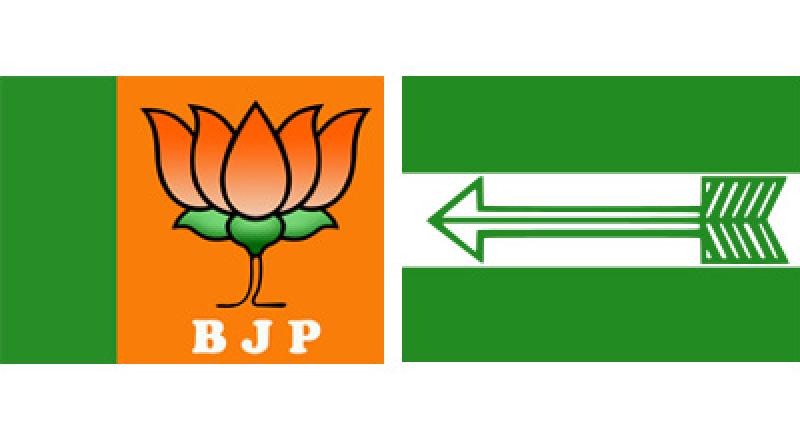 While the BJP or its allies have not officially confirmed or denied the seat-sharing arithmetic for 2019, sources in the BJP and JD(U) said the figures will more or less be the same.

New Delhi: The BJP and the Janata Dal (United) have apparently resolved their seat-sharing formula for the 40 Lok Sabha seats in Bihar, with the former agreeing to contest 20 and the latter accepting that it would field candidates only in 12 parliamentary berths. Both allies had not fought together in 2014 as Bihar’s ruling party had left the BJP-led NDA in 2013. The last seat sharing arrangement for the allies was 25 for the JD(U) and 15 for the BJP in 2009.

This newspaper had earlier this month reported that the BJP-led NDA’s decision to name the JD(U)’s Harivansh as deputy chairman of the Rajya Sabha was taken after both agreed on the seat-sharing formula, which brought down the JD(U)’s tally compared to the earlier formula.

BJP president Amit Shah met JD(U) president and Bihar chief minister Nitish Kumar last month over the issue. Sources said Mr Kumar indicated to the BJP top brass that his party would agree to give seats from its share to the NDA’s other allies in the state — Ram Vilas Paswan’s LJP and Upendra Kushwaha’s RLSP. The BJP, it was learnt, is agreeable to give two seats to the JD(U) from its share of seats won in 2014. The BJP had won 22 seats in 2014, while the LJP won six and the RLSP three. The JD(U) was reduced to winning just two of 40 seats in 2014. The BJP, sources said, could give its Darbhanga and Buxar seats to the JD(U). The BJP had suspended its Darbhanga MP Kirti Azad, and Buxar MP and Union minister Ashwini Kumar Chaubey could be fielded from Bhagalpur. While the BJP or its allies have not officially confirmed or denied the seat-sharing arithmetic for 2019, sources in the BJP and JD(U) said the figures will more or less be the same. Amid speculation that the RLSP wants more seats to contest than it did in 2014 and that it may switch camps if its demand is not met, the BJP and JD(U) will contest one seat each from the RLSP’s quota, while in the third seat RLSP’s rebel MP from Jehanabad Arun Kumar will contest.