Militaries of India, Pakistan took part in anti-terror drill of the SCO at Chebarkul in Russia for first time. 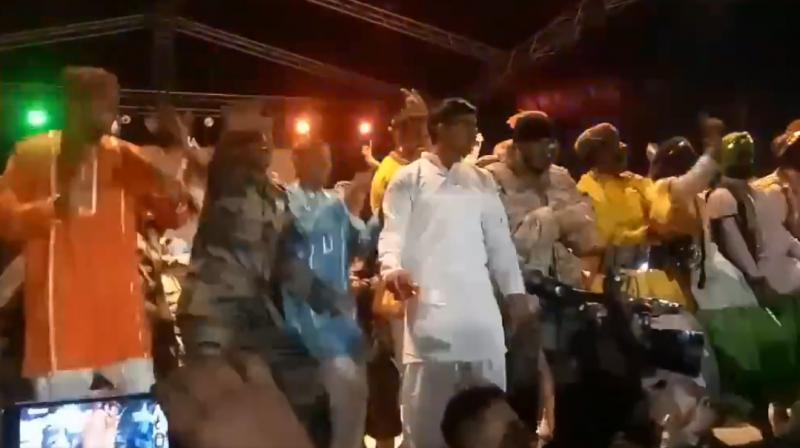 The soldiers are seen having a gala time on the sidelines of the recently-concluded anti-terror drill of the SCO at Chebarkul in Russia. (Photo: Twitter Screengrab)

New Delhi: A video of Indian and Pakistani soldiers dancing to the tunes of popular Bollywood songs in Russia has gone viral on social media. The soldiers are seen having a gala time on the sidelines of the recently-concluded anti-terror drill of the Shanghai Cooperation Organisation (SCO) at Chebarkul in Russia.

Militaries of India and Pakistan took part in the mega drill for the first time aimed at expanding cooperation among the member countries to deal with the growing menace of terrorism and extremism.

According to reports, the soldiers were attending “Bharatiya Divas,” an event organised by the Indian Army, with soldiers from member countries of the SCO in attendance.

As part of the SCO initiatives, the SCO Peace Mission Exercise is conducted biennially for the SCO member states.

The joint exercise was conducted by the Central Military Commission of Russia from August 22 to August 29 at Chebarkul town in Russia.

At least 3,000 soldiers from China, Russia, Kazakhstan, Tajikistan, Kyrgyzstan, India and Pakistan participated in the drill, according to the Chinese media reports.

The Indian contingent of 200 personnel was primarily composed of troops from infantry and affiliated arms and services along with the Indian Air Force.

The Indian contingent was put through a strenuous training schedule which includes firing, heliborne operations, combat conditioning, tactical operations and house intervention drills, according to curtain raiser of the exercise released by the Ministry of Defence in New Delhi.

The SCO was established in Shanghai in 2001, with China, Russia, Kazakhstan, Kyrgyzstan, Tajikistan and Uzbekistan as founding members.

It expanded to include India and Pakistan in 2017.

The Peace Mission 2018 also created a historic chance for four major military powers in Eurasia - China, Russia, Pakistan and India - to participate in the same military drill, Sun Zhuangzhi, a professor at the Chinese Academy of Social Sciences said.