Pushkar's brother beileves that she could have never committed suicide. 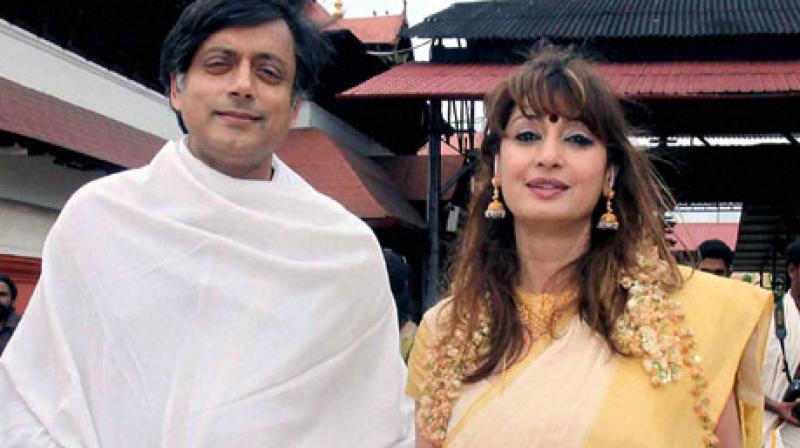 New Delhi: The Delhi Police, on Saturday, asked the court to frame murder charges, or in alternative, abetment to suicide charges against Congress MP Shashi Tharoor claiming that Sunanda Pushkar was about to address some press conference on IPL before her death.

The court was told by the public prosecutor that she had regular fights with Tharoor before her death, Hindustan Times reported.

According to servant's statement, Tharoor and Pushkar had fights in Dubai and he was hit by Pushkar at an instance.

The court was also informed their fights over a lady known as "catty" who was different from Mehr Tarar, the Pakistani journalist.

The servant talked about the press conference which Pushkar was about to hold on Indian Premier League.

The police informed the court that Pushkar was going through a tough time as could be evidenced from her e-mail which read that she had no will to live longer and wanted to die.

In her statement before the court, senior journalist Nalini Singh said Pushkar "sounded distraught" over a call which she made a night before the incident.

Pushkar was said to have informed her friend that Tharoor was going to divorce her after the upcoming elections and marry Tarar.

Refuting the public prosecutor's allegations, Tharoor's lawyer Vikas Pahwa said, “the prosecuter didn’t read opinions of experts who conducted psychological autopsy, who held that it’s neither a case of homicide nor suicide but due to some unidentified biological reasons. If there is no evidence of suicide where is the question of abetment to suicide.”

Pahwa also said the prosecution read the evidence in “bits and pieces” and tried to connect with the charges proposed by him, against the settled principles of law.

“I will argue on the next date, rebutting on each and every point. I can say that every bit of evidence collected by the SIT speaks just the opposite to what the Prosecutor has argued today,” he said while denying allegations that Tharoor was cruel to Sunanda.

“On the contrary there are many statements which say that Dr Tharoor had always treated Sunanda with civility & respect, but (the statements were) not read,” he added.