From 1947 to 2019: NRC timeline shows milestones in Assam’s history

This timeline post Independence shows a history of population exchange, a state trying to regulate flow of people. 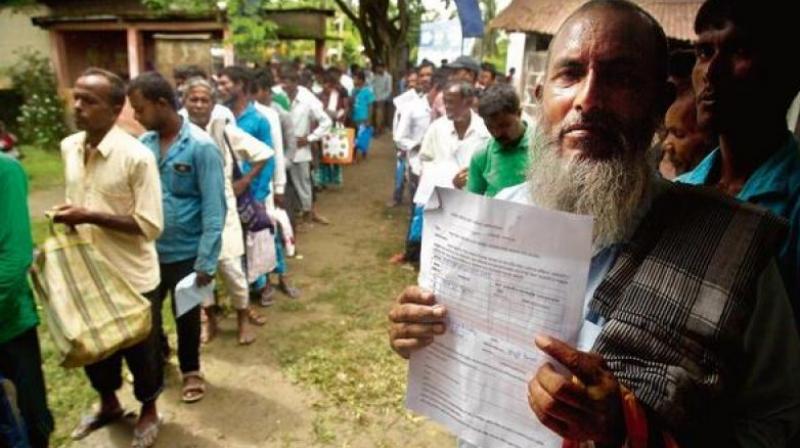 The first draft of the National Register of Citizens (NRC) which was published on July 30, 2018, updated for the first time since 1951, left out over 40 lakh people in Assam. (Photo: File)

Mumbai: The first draft of the National Register of Citizens (NCR) which was published on July 30, 2018, updated for the first time since 1951, left out over 40 lakh people in Assam.

The final list that was released on August 31, 2019 excluded over 19 lakh people. The government has given a window of 10 months to those missing from the final NRC to prove their citizenship before being sent to detention centres.

The register is meant to be a definitive list of Indian citizens in Assam, separating them from undocumented migrants, mostly those believed to be from Bangladesh.

This timeline post Independence shows a history of population exchange, a state trying to regulate flow of people, movements of ethnic nationalism that were defined by a fear of outsiders and attempts to define citizenship in a land of fluid frontiers.

1948: There were no restrictions on the movements of persons from India to Pakistan or vice versa even after Partition till July 19, 1948, when ‘Influx from West Pakistan (Control) Ordinance, 1948’ came into existence. Later, the Constitution of India formalised this as the cut-off date that entitled the Right to citizenship of certain migrants from Pakistan.

1950: Immigrants (Expulsion from Assam) Act came into force from March 1, 1950, following influx of refugees from then East Pakistan to Assam after partition.

1951: The first-ever NRC of India was published in Assam based on Census Report of 1951 containing mes of 80 lakh citizens.

1955: The Citizenship Act came into force that codified rules for Indian citizenship by birth, descent and registration.

1960: The bill was passed in the Assam legislative assembly to make Assamese the only official language.

1964-1965: Influx of refugees from East Pakistan due to disturbances in that country.

1971: Fresh influx due to riot and war in East Pakistan. Bangladesh comes into existence.

1979-1985: Six-year-long Assam agitation, spearheaded by the All Assam Students' Union (AASU) and All Assam Gana Sangram Parishad (AAGSP) for detection, disenfranchisement and deportation of foreigners.

1983: Massacre at Nellie in Central Assam which claimed the lives of over 3,000 people. Illegal Migrants (Determination by Tribunals) Act passed.

1985: Assam Accord signed by the Centre, the state, AASU and AAGSP in the presence of then Prime Minister Rajiv Gandhi on the midnight of August 14. It stated, among other clauses, that foreigners who came to Assam on or after March 25, 1971 shall be expelled.

1990: AASU submitted modalities to update NRC to Centre as well State Government in 1990.

1997: Election Commission decides to add 'D' (doubtful) against names of voters whose claim to Indian citizenship is doubtful.

1999: Centre took the first formal decision to update the NRC as per the Assam Accord’s cut-off date to detect illegal foreigners during a tripartite meeting between Centre, State Government and AASU on November 17, 1999.

2016: The Bharatiya Janata Party (BJP) introduced the Citizenship (Amendment) Bill. It proposed to facilitate citizenship for non-Muslim minorities from Pakistan, Afghanistan and Bangladesh.