Scindia’s supporters held a protest outside the state party headquarters in Bhopal, demanding that he be made the state unit chief. 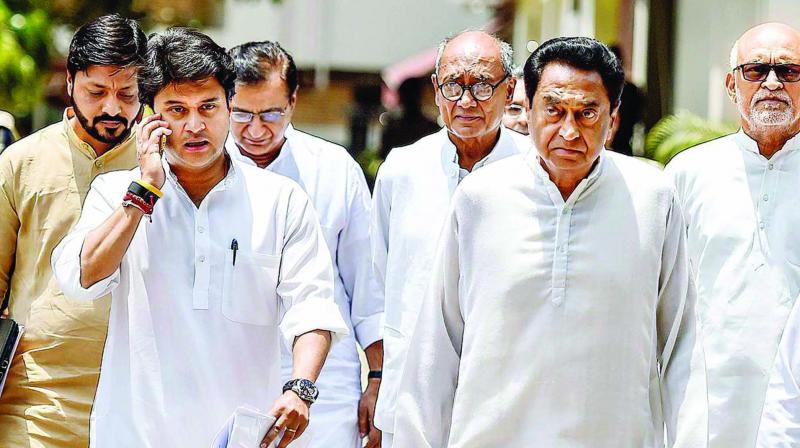 New Delhi/Bhopal: The crisis in the Madhya Pradesh Congress deepened further Friday with chief minister Kamal Nath asking the Congress high command to “ignore” senior leader Jyotiraditya Scindia’s demand to make him state party chief. Mr Kamal Nath met Congress president Sonia Gandhi on Friday for nearly half an hour. Mr Scindia, who is in New Delhi, hasn’t met the top leadership so far. Speculation is rising that he is looking for “other options”, which may include joining the BJP.

Sources said it was argued that Mr Scindia’s demand for the PCC chief’s post couldn’t be “encouraged” as his influence was limited to the Gwalior region. It was also noted that he hasn’t been active in state politics, so a local leader “should be propped up”. The high command is also not happy that Mr Scindia has brought these “internal differences out in the open”. Mr Kamal Nath, however, downplayed differences in the party after his meeting with Mrs Gandhi. He said: “I don’t think Mr Scindia is unhappy. I am ready to work with anybody. I also raised the issue of a new PCC chief’s appointment at the earliest.”

Mr Scindia’s supporters held a protest outside the state party headquarters in Bhopal, demanding that he be made the state unit chief. Datia district party chief Ashok Dangi Bagda has threatened to resign from the party along with 500 workers if Mr Scindia was not given the PCC post. Earlier this week, a minister in the Madhya Pradesh Cabinet had also said that it was Mr Scindia’s turn to become state unit chief.