Families want their wards not to be part up of forcess that are ‘unleashing hardships’ on Kashmiris. 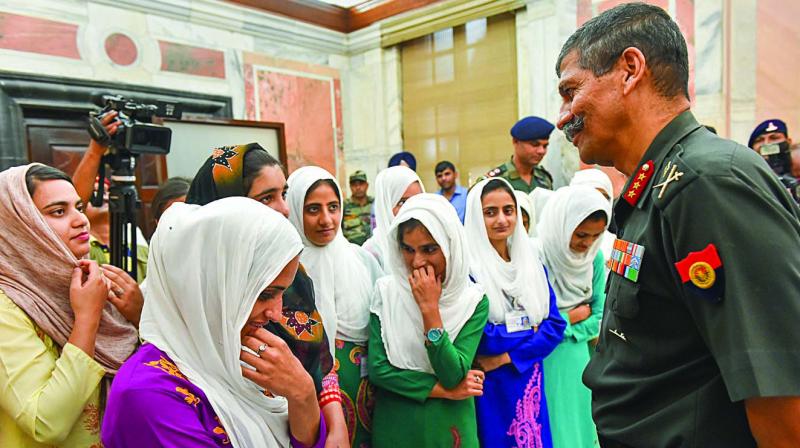 Hyderabad: When they met for the first time after their engagement early this year, this 28-year-old, who works in one of the para-military forces and is posted in Jammu and Kashmir, told his fiancee that after their marriage, she should teach Kashmiri children the importance of our nation and how it is important for every Kashmiri to love the motherland.

His fiancee, a PhD scholar and a lecturer in Jammu and Kashmir education department, happily agreed. In fact, India and terrorism in Kashmir used to be at the centre of all their conversations over the last several months.

As both the families got down to making arrangements for the “nikaah” and were looking forward to the marriage scheduled early next year, August 5 changed everything. Angered at the Modi government’s sudden decision of abrogating Article 370 and bifurcation of J&K, the woman’s family began pressurising the man to quit the services and join the voices that opposed the Centre’s move.

‘’You have to quit. You cannot continue in the para-military force when the Centre itself is harming the interests of Kashmir,’’ insisted the lecturer. The man did not yield and the marriage has now been called off.

In an alarming turn of events post August 5, Kashmiri men, who are either serving in Jammu and Kashmir police, Indian Army or the para-military forces are now under immense pressure from their family members and friends to give up their jobs as they feel betrayed by the Narendra Modi government for its decision.

What is even more worrying are the inputs suggesting that the Jammu and Kashmir police, which has a direct interface with the locals in the Valley, could revolt or allow acts of dissent under their watch something that seems to be preventing the administration from easing the lockdown in the valley.

‘’Several Kashmiri men are under tremendous pressure from their family members and friends to quit the services immediately as they are angry with the Centre’s move of not only scrapping Article 370 but also imposing the lockdown due to which they are facing untold hardships over the last 26 days. It is up to the men whether they will succumb under the pressure or continue to serve the country,’’ one Kashmiri, who is presently serving in the forces, told this newspaper, adding that the pressure is mounting with each passing day.

He says it is not only the family pressure; the fear of being targeted by terror groups once restrictions ease is also weighing heavily on the minds of Kashmiri families. ‘’We know the backlash is going to be severe in the days or months to come and terror groups will leave no one who is serving the forces,’’ he said. He is however quick to correct himself: ‘’This time around, it is not only the terror groups. Every common Kashmiri too is very angry with the security forces and the Centre alike.’’

The Valley has had a history of brutal killings of Kashmiri men who were in the security forces. In May 2017, terrorists shot dead Lieutenant Ummer Fayaz, who was serving in the 2nd battalion Rajputana Rifles of the Indian Army. He was abducted and later his bullet-riddled body was found in Shopian district. In June 2017, DSP in the J&K police Muhammed Ayub Pandit was lynched to death by a violent mob in Nowhatta.

Sources said that the disturbing news that Kashmiri men serving in the security forces are under immense pressure from their family members to quit, has also reached the top brass of the J&K administration and the Centre. It is learnt that the administration is worried on easing the lockdown in the Valley as, if there is a revolt by uniformed personnel, the situation could easily spiral out of control.

‘’We are aware of the developing situation and will deal with it accordingly. We are confident that all those serving in the forces will continue and not give in to any pressures as they know that scrapping of Article 370 has been done for the overall good of people of Jammu and Kashmir,’’ a senior police official, wishing anonymity said.

However, more than those who are serving the Indian Army or para-military forces, it is the personnel of the over 80,000-strong Jammu and Kashmir police that is the immediate cause of concern for the top brass.

‘’The J & K police has a direct interface with the locals and are privy to the bottled-up emotions of the people. But there is nothing to worry about,’’ the police official said.

Over 200 weapons issued to the Special Police Officers who assist the J & K police were seized just days before August 5, on suspicion that the SPOs could align with the terror groups.  ‘’At many places across the valley, more number of para-military forces have replaced the J & K police and this was a tactical move. But, yes, families are pressurising them,’’ admitted a police official.